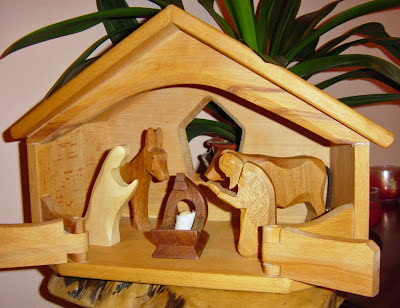 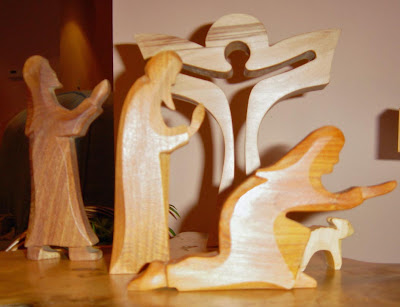 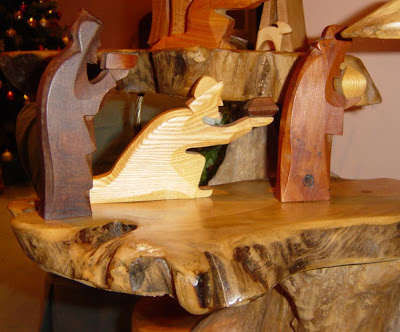 A few photos of the nativity crib that goes up every year. I first bought it from a little wood carving company in Devon, by mail order, after seeing some of their stuff at a friend's house and finding a small ad in a parenting magazine. It was almost prohibitively expensive and I could only justify it by saying that it would become a sort of family 'heirloom', something of great sentimental value.
And that is just what it has become. As well as memories of happy Christmases when we were all together, I remember weeping over it the first Christmas I was alone after the divorce, and again the first Christmas after my ex died. I remember the fun as the children got it all out and arranged it, and more recently, DG's wonderful stories of what *really* happened which drew tears, not of sorrow but of laughter. In one of them, Mary went off with the Angel of the Lord (or was it a wise man?) leaving Joseph to mind the baby and feed the ox and ass. Last year we lost a lamb - or rather, I think I know where it is but can't get at it. It's inside the 'table' the crib is standing on and I'm sure there's a parable there somewhere!
I wonder if that company still exists. Their work was wonderful. I remember a superb Noah's Ark with a wide range of two-by-twos from across the animal kingdom, and an amazing rocking horse that I would never dare let the children use, it was so expensive. I am so glad I persuaded myself to buy the nativity. It was a financial sacrifice then, but time and experience has given it worth well above and beyond what I paid for it. It was one of the non-negotiables when we moved out, and goodness knows, there weren't many of them at the time.
The 'angel' doesn't go with the set. It was made by Tom Mealing, a lovely man, not passed on, who worshipped at the church my parents go to. He was very gifted at carving and used his talents for the church in various ways. It just seems right to put his Worshipper with the Christmas characters
Apologies for the poor quality of the photos - somehow the colours and the lighting always produced grainy photos in my living room.
Posted by Joy at 08:25