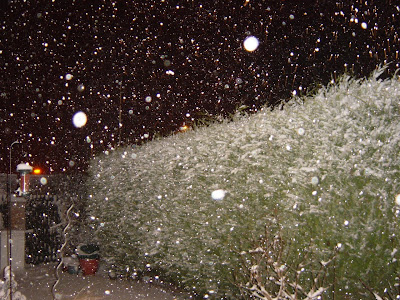 For the first time in I don't know when, I slept on beyond four or five. It wasn't a solid sleep but good enough, and waking at seven fifteen was a surprise. It feels pretty good, once in a while, I must say! I wonder if it was the new duvet: it was certainly much more confortable and snuggly. The old duvet is now waiting by the back door - it will go into the shed and cover the freezer to keep it just a little bit warmer. That may sound odd, but freezers don't like to sit in air that is too cold and - well, I would say 'too cold' just about describes it right now! As long as I don't cover the ventilation grills, it should work a treat.
Yesterday wasn't really a day of rest and I didn't fall asleep during the day, surprisingly enough, but it was a gentle and pottering day. I made biscotti for the first time and will make them again, they're really very easy and moreish. I made some cookies from a recipe given to me by a mum-friend from school. The breadmaker worked its usual magic and produced a white loaf and it's now starting to do the same thing with a wholemeal loaf, which takes an hour longer. Both of these, plus any brothers and sisters, will go in the freezer. There's quite a lot of empty space in the new freezer and filling them with bread seems a good idea. DD can have a loaf each Sunday when she comes over, so it won't be wasted.
I was very disappointed to see Pamela go out in third place in Strictly last night. I felt she was the most beautiful dancer of the three of them and the judges seemed to agree with this, but I guess they did perhaps play it safe in their exhibition dance and she's not a 'celebrity' of today in the same way that the other two are. I remember her from decades ago, making me giggle many a time, but a modern audience wouldn't necessarily recall those times.
So on to today. The snow is lying thickly, of course. It doesn't look as if any more has fallen overnight and the forecast for today is sunshine and to remain below freezing all day. That being so, I will either stay snuggled in my warm little house and do homey, housewifey things or I will don my wellies and trudge out for a walk. I could do both, I suppose! I'm pretty sure DD and DG won't be over for their Sunday tea. DD still isn't feeling wonderful and their road (narrow, winding, busy, cars parked on either side, ungritted) will be well nigh impossible to negotiate without bumping other cars. Best not to even try! A shame, but, of course, for two weeks we are not restricted to weekends only. Yay!!
I'd like to get some more potatoes ready for roasting and in the freezer this morning. I know I already have some, but I managed to get a bag of King Edwards yesterday, which do make the very nicest roasties. They won't go to waste and, from a controlled eating perspective, it makes it so much easier to just have one bit of roast potato in a meal.
I will also sit down and make a serious list of everything that is ready and what still has to be done, bought or prepared, and then timetable everything. I do like to be clear exactly where I am with everything at times like this.
If I get all of that done, I will be very pleased. :0)

Photo: just another of yesterday.
Posted by Joy at 07:36