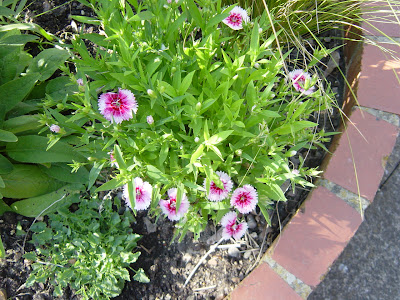 First of all, I found a recipe for soft wholemeal rolls/baps. It took a long time: there don't seem to be many about out there. That went well and the results are delicious - one I had for dinner with my burgers, several have now been filled with cold meat, individually wrapped and put in the freezer for school lunches and the remaining rolls have been frozen just as they are.

A while later I fancied baking a cake. I have no idea where the urge came from but I'd been stuck in front of the PV for a while and needed a break. I found a Tana Ramsey recipe for lemon drizzle cake which was absolutely delicious except that I made the beginner's mistake of not checking if it was cooked through. You'd think I would know by now, wouldn't you? When I took it out of its paper lining, some of the middle dropped down and out and splodged all over the working surface!
Next time I will use two smaller loaf tins rather than one larger one as the top had started to over cook, even with paper over. There's enough left to make it worthwhile though, so no problems: some is for tea tonight and the rest has been frozen in small portions.

And finally, when I went shopping, Morrisons had some nice looking lean pork mince so, as I wanted to try a recipe posted by Maggie on her wonderful food diary, Kitchen Diaries Challenge 2011, I bought some. Pork burgers with thyme and lemon, actually diddy little patties, like squashed beat balls. Unfortunately, I couldn't get spring onions so used a red onion instead and had to use ordinary garlic instead of wet garlic, but the results were still absolutely delicious. Three portions for the freezer and one for today, yum yum. So much for running the freezer down to defrost it!!

I spent a lot of time in front of the monitor. OUSA has virtual hustings going on and a small group of us had the task of selecting appropriate questions from the many that were sent in. I woke early with a bit of a headache today which, I think, is due to too much computing. Maybe a few breaks are in order today.

Well, must go and pop in the ingredients for a white load for when DD and DG come to tea this evening and the coffee is smelling good so must be about done. It's all go, isn't it?
Edit: Just popped back in here to say it's raining!! Really, really raining! The sky is very overcast and solid grey so maybe it's set for a time. Fingers crossed. A real soaking would be wonderful.