Good morning.  So here we are.  A new day and a new year (and some might say it is a new decade as well, depending on how you count them).  It's still cold outside but not frosty today (yet).  No snow and we probably won't get any now although, with my past record of prediction, this probably means there will be shedloads before the end of the weekend!!

I lit the Christmas candles yesterday for the last time and they burned all through the evening.  Some of them are quite low now, too low to stay in their holders but I won't waste them.  I have plain holders that have no fancy decoration around so I will, throughout January, burn them until they have no wax left.   It actually might be a good time to look online for next Christmas' candles.  Maybe there are some special offers around.

The day ended up very pleasantly with Beth and Alex over for a buffet, games and a DVD.  The time before they arrived was spent getting things ready.  When they arrived, I was more than a bit surprised, as they both had cases.  Yes, they were staying overnight and no, they didn't mind sharing a room.  Just as well I keep my guest room pretty much ready, isn't it?  There were a few bits and bobs on one of the beds which were easily shifted into my room.
Just a bit of a mix up and a very nice one too; I was so pleased. 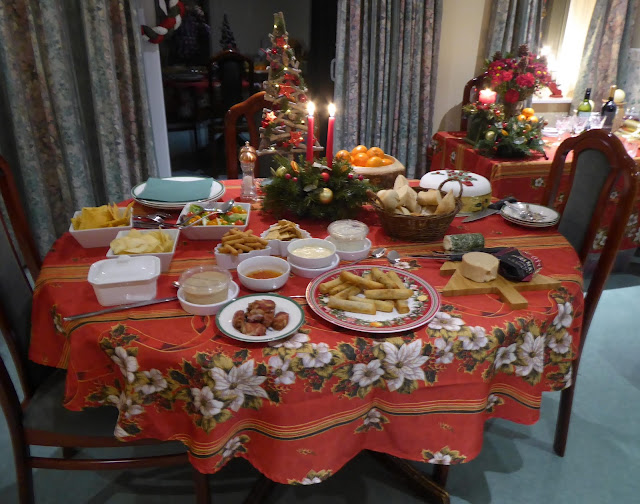 We had a nice buffet; the only thing missing in this photo is the baked camembert which was still baking - and the alcohol which was sitting outside the French window chilling nicely!  There's not an awful lot of food left and what there is will go home with B and A later on.
The Christmas cake finally got cut and it is absolutely delicious.  I've hacked off a hunk for Beth to take and I've ordered some 4"x4"x4" cardboard posting boxes and will be sending some to Dad and some to John.  Dave and Anna will also get some.  I can't send any to American brother because of rules!  That will leave just enough for me to have some now and again as a treat.
I'm glad fruit cake keeps well!

I was up at five and got everything cleared up from last night.  I have no idea if Beth and Alex saw the New Year in but I was up in bed by just after nine and well asleep by ten; we just left most of the post-feast mess and it didn't take me very long this morning to get that all sorted.

I have, sitting before me, today's Twelve Days gift.  I know what it is, it's one I remember, a pot of instant gingerbread porridge.  As I have today's meals all planned, it will go on the menu tomorrow.  I must remember to start on the tea bags.  The first is Assam which, I think, is fairly mainstream.

When B&A come down, we will have breakfast and then, at some point, they will leave, leftovers in hand, and I intend spending the rest of the day doing a bit of clearing up of decorative bits and bobs, planning meals and so on.  I have yet another new cookery book that arrived yesterday.  This one is the new Chubby Cubs book so I have such a lovely big pile of interesting books to dip into and enjoy.  Bliss.  Well, seeing as we are tier four with nowhere to go and strong encouragement to stay inside anyway both from the government and from the cold weather fairies, it's nice to be able to do my duty and enjoy it as well.

(Actually, don't tell anyone, but I have two CC books - I made a mistake and pre-ordered twice, silly me.  Not to worry, Beth was interesting taking the other one so that's a New Year gift to her).

I don't really do 'resolutions' as such but I do like to set mini challenges as I go through the year and sort of determine things (if that makes sense).
I was thinking backwards and forwards and I have decided that I need to aim to be as positive as I can, as much as I can and wherever and to whoever I can.  Given the current situation, that's not as vague and wishy-washy as it sounds and, at times, will take some real determination but I think it's worth it!
If I had a 'word for the year', it would be 'positive'.

What have you decided for the New Year?