It's so lovely and sunny this morning that I thought I would have coffee in the garden. I treated myself to a big pot of fresh coffee (not instant) and meandered outside, only to find that it's actually pretty chilly with a very fresh breeze a-blowing, not at all comfortable for sitting and drinking coffee. So I took a few quick photos and came back in.
Here are some of the photos: Still pretty, still with cheeky faces following the sun around from side to side. 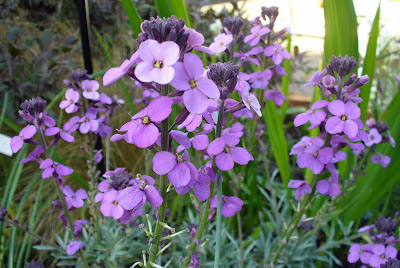 The perennial wallflowers are doing really nicely now. I'm so glad I replaced the old, woody ones. 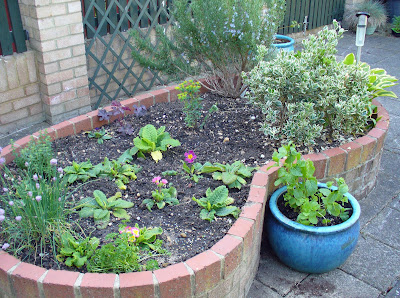 This is the herb bed to the left of the garden. Not completely herbs, of course, there's a bush, some hostas, heuchera and the euphorbia, plus, when I get them in, some cosmos. But there is thyme, rosemary, oregano, chives and parsley and the mint I will probably kill is in the greeny-blue pot to the side. There's a great big gap in the middle and I'm not entirely sure what to put there in the longer term. 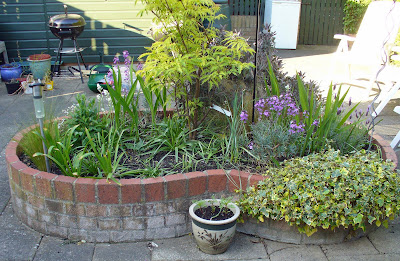 This is the middle bed. It looks a bit scruffy at the moment because the blue and white bells and the other bulbs are all dying back, but there's exciting stuff coming up: campenulas, lilies, irises, pinks, lupins, nerines . . . well, I find it exciting anyway. A miracle every spring. 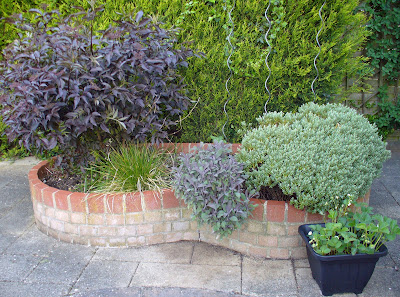 And this is the bed on the shady side of the garden with colour mostly being provided by the different coloured foliage. See those curly 'canes' - that's where the sunflowers will be and they have definitely grown considerably. Behind the bush that thinks it's a tree (which is getting another chop come the autumn as it's sending up new growth right from the middle bottom which will be the basis for next year's bush)I will probably plant some delphiniums. And the strawberries are in that black pot to the right, close to the very much pruned back sage.

Only a little garden, but I get a lot of fun out of it at the moment.