Good morning, everyone.  It turned out to be a rather damp day yesterday, interspersed with sunny intervals.  As the showers were extremely heavy, I didn't risk the allotment but I did do a bit in my own back garden.  The vegetable plantlets are now hardening out outside and in a few weeks will be ready for planting in their final destination.

Looking around, I saw this. 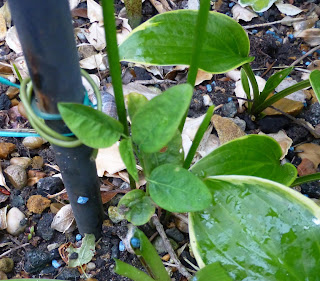 For a number of years I have tried to get a passion flower plant established there.  I had one but it failed to thrive.  Last year (or was it the year before?) a lovely friend gave me a plant she had brought on herself but the same thing.  I concluded that it wasn't the 'right' place and comforted myself with the knowledge that the hostas and the hyacinths like it there anyway.  And then, yesterday, I saw this - not the hosta but the one right in the middle of the photo.  It is growing where the passion flower plants were and I am now wondering if one or other has decided it likes that position after all and is giving it a go.
It could, of course, be a weed but I don't think so.
I am sure some of my much more knowledgeable readers will recognise it - please do let me know.

Poking around in my middle bed, the delphinium seems to be fighting back after being chomped by snails and the penstemon is sending out growth but I have lost the veronica and I dug the roots up yesterday.  I think I might like a lupin there instead.  I had a lovely lupin elsewhere in the bed but managed to kill it by spraying it with weed killer in mistake for bug spray several years ago.  I was so cross with myself!
Anyway, I think a trip to a garden centre might be on the books this week.

I'm trying very hard to keep the Japanese anemone contained this year to give the other plants around a chance and dug up several little efforts that were spreading elsewhere.  I was warned that they are a bit invasive!.  The fuchsia was a bit swamped by it last year so I'm hoping it will be better this year.

Apart from garden, the rest of the day was pretty lazy, all in all.

Today it has clearly been raining more overnight but I will do allotment this morning unless it is actually pouring with rain.  If I do get caught, I can shelter or come home but there are things that really do need doing!

Beth and Al are not coming over today so I have another day to myself.  I've been doing more planning for my holiday from home and have various printouts scattered around the computer.  I have also been organising meals and have a short shopping list of things to get.  It should be fun!

It's nearly seven so time to get moving, I think: it is just too easy to sit in front of the computer and let the time idle away if I don't.
See you tomorrow!