Good morning, everyone.  It's another sunny morning, so, so pleasant outside at the moment, fresh but not chilly.I love it specially before the humidity rises and it starts to get uncomfortable.  I gather it is due to break soon so I shall be grateful for it while I can.

Yesterday saw me at the allotment early to weed and hoe and generally fight the weed battle and then strim the edges so they now look nice and neat.  Then, when Beth arrived, we grumbled over the fact that the pigeons have obviously discovered the peas and had feasted.  Grrrr.  So we abandoned what we had planned to do and sorted out the bit at the back that still needs doing so that we could access and salvage some netting that was under some plastic covering.  First we had to sort out all the wood that we had put on the cover to keep it down, something that was fairly high on our list of Things To Do.  The usable stuff is not stacked beside the shed and the manky stuff is in the back of Beth's car, ready for her to take it to some friends who have a wood burner.  We then made some makeshift protection for the peas so fingers crossed.  Then there was just time to give everything a good watering before I went home for the first of two meetings.

I think that today will be more hoeing and clearing that back patch - there aren't many weeds because it's been covered, but there will be roots!  I'm hoping that we will get that done by the end of May, as well as planting out some squash and courgette I have in my back garden at present.

Two meetings later and it was tuition which went well as usual, although there could have been a catastrophe as I spilt water all over my laptop.  It's dried out now, though, and seems fine again.

Today is definitely an easy day after a busy week.  Allotment is a bit later as Al has now officially finished school and is on study leave so Beth can have a lie in.

After that it is home to a clean house.  You see, I've been naughty.  Every fortnight I have two hours of cleaning which is great as they do the house from top to bottom.  I've just arranged for the same company (a small local one) to also provide a cleaner for one hour on the other Friday to do downstairs.  How bad is that, eh?  Nice though.

Then it should be a relaxing day, sitting in the warm outside air, reading and resting.  Maybe.

However, the very nicest thing about today is this.  HALF TERM HAS STARTED!  Yes, I know my life is one long half term now but the old feelings die hard and today is report writing day, made all the better because there are no reports to write, followed by a week of - well, not a lot.  One tuition session and that's all.  It's a jolly good feeling and I am enjoying it with all my might and main!

And look what I have just seen. 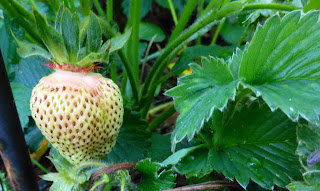 Mind you, I have also just seen two bluetits eyeing up the strawberries in a calculating way so maybe this is the year I cage them.  As Diane suggested, canes, jam jars and netting.  It won't look lovely but if it protects my berries, I don't mind!

Better go - there's a few bits and bobs to tidy up before the cleaners come and it's time for another coffee.   Enjoy your day!
Posted by Joy at 07:38