What a glorious morning it is.  A bright, blue sky, warming up, birds singing their hearts out.  Really lovely and I hope it stays like this.  Yesterday it clouded over a bit midday but brightened up come the evening.

Well, yesterday went really well.  I did some allotmenting.  The hoe is the most important tool right now as the weeds fight back, but I have no mercy!  The two types of peas are doing really well, we have more French beans (although I did hoe the head off one - ooops) and, after a slow and late start, the potatoes have also decided to show themselves in greater quantities.  The grass got a mow but I forgot to take the strimmer so I will have to do the edges later.  Perhaps I can go down at some point this afternoon.  On Monday, Beth virtually finished the strip for the bins so I got that completed and moved some soil back into the raised beds. 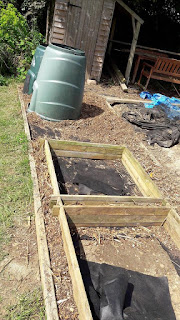 A quick snap Beth took on Monday.  The gap in the chippings is now filled and there's soil in the two raised beds.

One of those beds is going to be for guinea pig food.  Seriously.  Well, partly.  A little friend has a guinea pig and she might come along and 'help' by growing some chard and kale in one of the beds, the young, tender leaves for us and the older leaves for the guinea pig.  We might also put in some spinach as so many recipes ask for a handful of spinach nowadays and it's not cheap!  We're thinking about carrots in the other bed as it's not too late, or maybe leeks which we have just sowed (or is it 'sown'?).

The blue and black mess is the portion we still have to fork over and clear.  We WILL get there!

Once home, I brought in the washing and then did some being lazy until some folk came round and after that it was time to start dinner and watch my round of early evening telly - Pointless, Debatable, Eggheads and Great British Menu.

Today is busy, busy, busy.  In school for a concert, then a meeting with a coordinator, then off to Wyvale for some more potting compost, maybe allotment to do the edges, then tuition x 2, then a governors' meeting.  I shall eat late this evening!

Have a lovely day and I hope you have the opportunity to enjoy the lovely weather.