. . . and it is chucking it down with rain.  No allotment this morning, I'm guessing, and maybe no Ingatestone Hall either unless it clears up somewhat.  Never mind, there will be other days for that and, goodness knows, the garden really did need a good downpour, as did the allotment - several good downpours, in fact.  When it dries up, I shall check the various containers I have scattered around for collecting rain water for the blueberries.

Yesterday I had planned to go to Hyde Hall but, when it came down to it, I didn't fancy it so much and one of the points of a holiday is that you can do what you want to do, when you want to do it (within legal limits, of course).

So I stayed home and made the best of the time in my back garden instead.  I flexed my muscles, such as they are, and managed to get large pots and even larger garden furniture moved around to where I had wanted them to be.  I went to Wyvale and B&Q and bought two small (and surprisingly cheap) cordylines for the planters either side of the arbour and got them in, a lupin which is now in the middle bed and a small sage which I think will go in a pot as it does grow large after a while.
I got some large pots filled with earth ready for the tomatoes when I pot them on and dealt with some small piles of rubbish.  Things are now neater and my stack of bags of compost is smaller.
I thoroughly enjoyed myself so it was a great use of my time in more than one way. 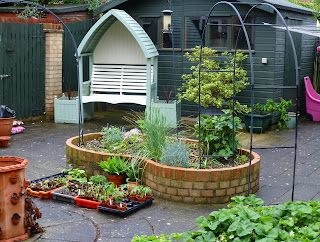 I now need to spend half an hour out the front as it's got a bit tatty with a few weeds attempting to regain dominance.  But not this morning!

It is now obvious that the late frost we had did do some damage to the strawberries after all.  A shame, but there are loads of flowers now coming to take the place of the damaged fruit.  Nature sorts things out quite well really, doesn't she?

If I do stay home, I have nice things to do.  I need to make some lemon marmalade and I would love to cut out some more squares for my duvet cover and maybe even get started making the disappearing nine squares.

So, whatever happens, it will be a great day.  I hope you have a good one yourself too.