Yesterday was very, very lazy!  Very.  By the time DD and DG were motivated enough to go home, I decided that I might as well have a PJ day.  One of the delights of living alone is that occasionally one can indulge in this way and, seeing that I had no reason for going out, plus the fact that it was chucking it down a lot of the time, I did!

That meant, of course, that no decluttering or sorting was done (blame laziness, not PJs here).  I did take a look at the cupboard under the stairs, turned a whiter shade of pale and firmly closed the door again.  To recover from the shock, I watched the remaining episodes of Perfect Housewife, plus the Christmas Special!!  There's nothing like watching someone else do it, is there?
However, I had bustled around in the morning and tidied up after Saturday evening, so the place is in a reasonably OK state - I wouldn't have worried too much if someone came to the door and needed to be invited in, which is my baseline for housework neurosis.

I did, however, feel somewhat guilty this morning about not having dealt with one cupboard or drawer so, inspired by Diane's good example, I took a look at my pots and pans drawers.  To be fair to myself, most of my kitchen cupboards are not too bad as far as clutter is concerned, with a few disgraceful exceptions, and these are not exceptions.  I don't have loads of pots and pans although a few are in another cupboard because they won't fit in the two drawers, but what was rather shocking was the amount of dust and 'stuff' lying on the floor of each drawer.  However, because it's pretty organised in there, it took literally ten minutes to life everything out, give the drawers a good clean around and replace the contents.  These photos are 'befores' - they're a lot cleaner now. 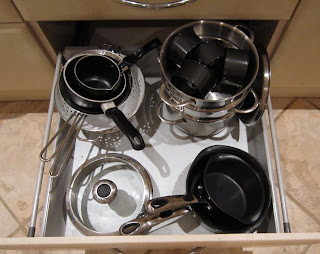 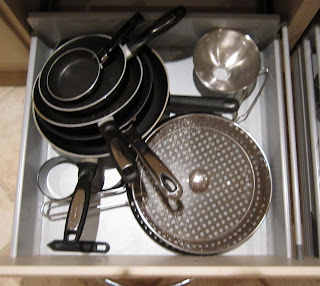 Two saucepans and one lid were on the draining board when the photos were taken and the very big pot that I use for everything from boiling turkey carcasses to making jam and chutney is elsewhere, having been borrowed by a friend, but even so, you can see that it's all well in order!
Mind you, looking at the state of the grouting between the floor tiles, I really do need to do Anthea's thing of two parts bicarb to one part white vinegar and get to work with the toothbrush (yes, there is one under the sink).  Another thing to go on the list!

I have to be completely honest here and say that the other drawers are not anywhere near as tidy looking and do actually need a good declutter.  I have 'before' photos, so maybe they are something I can do today.

Something else I read in the Slob Blog was the 'thirty one days of details' project which entailed looking not at the big picture but at little corners for a more detailed declutter.  One such little corner (of which there are many in my house) caught my eye as I read, so I think I must take this approach as well.  They're five minute (or less) jobs, details, nothing more.  Anything bigger is not a 'detail'.  So this is my first Detail: it sits to the left of me as I type this blog entry and there's necessary stuff there (not all of it though). 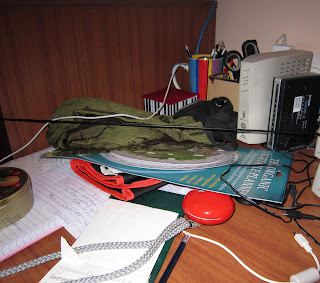 And about five minutes later (including dusting, washing up and putting away):  aaaahhhh!  That's better.﻿ 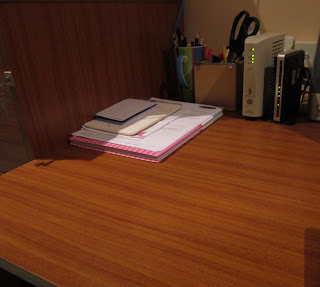