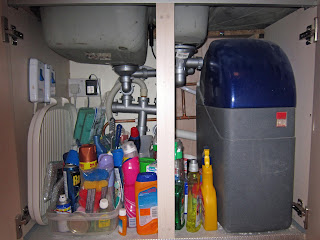 It wasn't absolutely diabolical, was it?  No, it wasn't, it was just rather untidy and disorganised.  It's a useful space that would be a lot more useful if it wasn't for the water softener - not that I'm complaining about that, far from it!  The main trouble was that you just couldn't tell what was in there and things were beginning to stack one on top of another.  Also, all the clothes washing things were being kept on the counter, not looking particularly 'right' there, just because there was no room underneath. 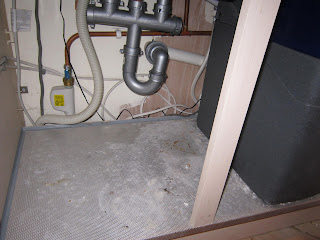 Then things got sorted.  Can anyone tell me why I have three bottles of hob cleaner (which is also great for shining the sink!), two of window cleaner (that I don't use), goodness how many Vanish cleaning sticks, two Pledge aerosols, two Mr Muscle plughole cleaner thingies, several boxes of stuff to clean out the dishwasher and/or washing machine and so many scourers I won't need to get any more for years . . .?  No, nor can I . . . 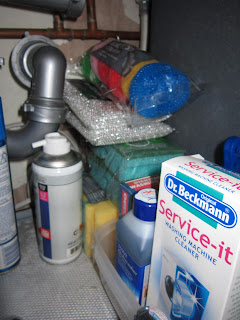 Anyhow, after lots of sorting, checking, chucking and wiping, here it is now: 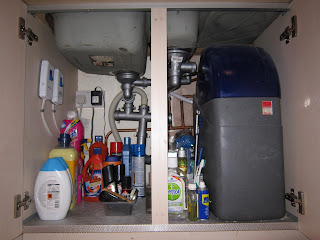 It's never going to look pretty, it's not that sort of space, but it's now organised.  The washing stuff is on the left, things I won't need very often are all at the back and there's even space for the washing up liquid and spray cleaner which is currently in a nice white container to the left of the sink.


Several things went into my housework box.  I know it's hard to believe, but I do actually have a very organised box for general cleaning and housework.  It's really one of those open tool boxes with a handle and in it I have polish, cleaner, various cloths for all sorts of tasks, window cleaner, Dyson attachments and two socks.  Why socks?  You obviously didn't watch 'the Perfect Housewife' if you have to ask that!


And there's now one thing left out. 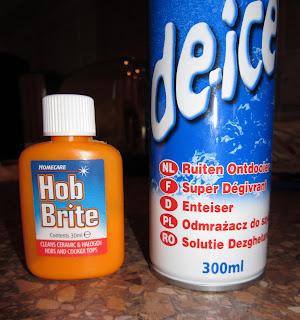 It must have come with the range when it was put in, I'd never, ever buy such a titchy bottle of stuff.  And it's sitting on the side because I intend to use it later on.  Where did I put the de-icer that is next to it for size comparison purposes?  In the car, of course - what it was doing under the sink in the first place I will never know!


And I am NOT taking bets on how long it will stay like that, OK!!!


(In case anyone is wondering, those two switches on the left are my gloriously accessible stopcocks.  One for the mains water and one for the outside tap.  Reassuringly convenient.)