﻿ Well, I did it!  I woke naturally just before four and by five I was well on the way to Sainsbury's.  What I haven't got now we will have to do without - one thing's for sure, we ain't gonna starve!!

It was pretty good in Sainsbury's.  Enough shoppers to make it sociable but plenty of room to move.  I exchanged rueful 'we must be bonkers' smiles with several other shoppers, but it was well worth the effort to go early - it's going to be a heaving nightmare later.  The worst thing was the Internet shoppers, or rather the staff who were collecting the Internet shopping.  They have such huge trollies and did block the way a few times, but no complaints from me.  And now I'm home, everything has been put away and I need to plan out the rest of the day.

A loaf I put in the breadmaker when I woke this morning in the bread maker is beginning to smell almost done and when that's out I will make a wholemeal/granary loaf.  Also this morning I want to make the stock from the giblets and some chicken wings, get the turkey ready, make the biscotti and I have some VERY ripe bananas so I think I will make some banana bread - there's got to be a recipe somewhere.  Charlotte is, I sincerely hope, coming at nine to do downstairs.  That gives me time to have a coffee, a rest and read the paper that I bought as a treat as well as getting the next loaf on before she arrives.

I will leave you with a photo of the Guardians of the Christmas Tree who have been joined this year by five fleecy friends from Somerset. 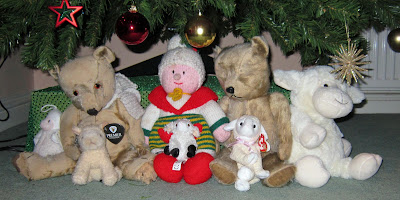