Or rather, more accurately, parsnip preparation time - which doesn't have nearly the same zing to it, does it?

Around came DD and DG and, after a lunch of cheese on toast, DD and I set to getting the bucket load of parsnips sorted.
Step 1:  Into a bowl of warm water to soak off the mud
Step 2:  Peel, discard, de-core and generally prepare
Step 3:  Dunk in bowl of cold water.
Step 4:  Blanch in boiling water for about 5 mins
Step 5:  Drain, steam dry, cool and bag or open freeze.  The ones I'm keeping for Christmas are being open frozen while the ones DD took home were in bags.
It took a while but it was worth it.

After that we strained the strawberry gin which has been 'festering' since August.  My word, it smells good.  We got five small-ish bottles of the stuff, four for hampers and one for Christmas.  What didn't fit in the fifth bottle I am enjoying right now.

DD then put one of the bottles in a hamper she is giving to a very dear friend and I took a photo or two.  Doesn't it look nice, what with the jams, chutneys and strawberry gin?  Well worth the effort. 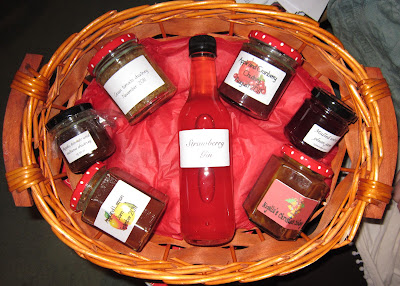