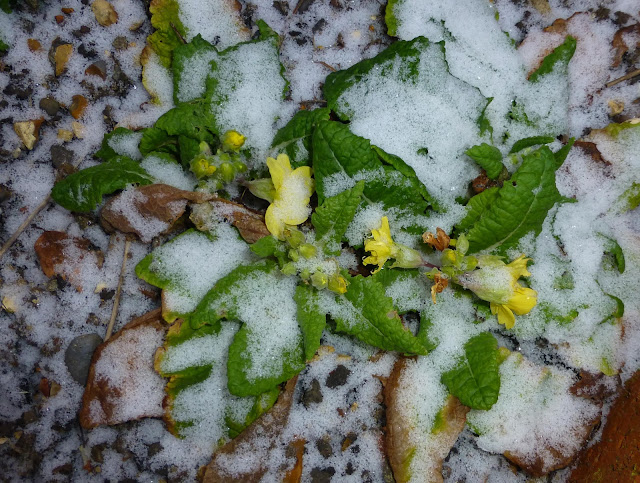 I was quite surprised to wake up and find no snow had fallen overnight.  All through yesterday it came, very, very fine flakes almost like grains of sand, adding nothing to the depth of the lying snow and making the day very dull and gloomy.  We are still forecast for a 'significant fall' during the day at some point but I will believe it when it happens and not before.  For now I will plan lunch as usual: roast chicken for Alex and me and something vegetarian for Beth, probably jacket potato as I know she loves that.  If they can't come, nothing will be wasted.

I did not-a-lot yesterday, it was a very lazy day, but I did get another row of the Christmas throw finished and I have to report that the pancakes were rather tasty.  A cup of SR flour, a cup of semi skimmed milk and one egg, all beaten together with a pinch of salt and I added some dried cranberries, that being what came to hand.  It makes very thick pancakes, not crepes.  Mr Oliver suggests grating an pear or an apple into the mix and I will try this at some point but yesterday I had some with maple syrup and single cream and they went down a real treat.

Today, as already mentioned, it is roast chicken.  I've brined the chicken and now just need to stuff a few flavoursome things inside it before popping it in the oven.  Easy peasy!  And carving should be a doddle.  I've been working on my knives now and again, just running them through the electric sharpener and they are so much better, all of them, with a good sharp edge that makes them a lot safer to use as well as more efficient.  It wasn't cheap, but that sharpener was money well spent.

Snowday or no snowday, I will have to make sure everything is ready for tomorrow so that's another thing on the list of things to do.  It's mostly ready, it just needs a bit of tightening up really.