Good morning, readers.  Is it cold where you are?  I read on a friend's Facebook page that it is -5 where they are, which sounds horrendously cold.  There's no frost here so I am assuming it's not been all that bad overnight, although maybe it's been cloudy.  The forecast for tomorrow keeps changing.  One minute it says snow, the next, rain.  A good, heavy snowfall resulting in a snowday would be idea on a day when I have a lesson observation but I really can't see it happening, can you?  Not a reason for neglecting the planning anyway!

As I hoped, yesterday was extremely lazy to the point of indolence when I did precious little except crochet squares for the throw.  It's coming on, I know the pattern now so don't have to keep referring to the instructions and as I am sewing ends in each time I complete a square, I feel I'm getting on well.  There's nothing worse than a huge pile of squares, each with six or seven ends to sew in, is there?  Quite demoralising!

Apart from that I took part in an interesting exchange of views with someone on Facebook (I didn't say all that much) where there was the suggestion that everyone should be paid the same, regardless of responsibility, circumstance and hours worked or, indeed, whether they worked at all.  Can't see that working, can you?  Where's the incentive to go the extra mile, work the extra hours, take on extra responsibility and stress?   If I could be paid the same as everyone else in the country for doing nothing . . . well, it's very tempting, isn't it, even for someone who actually likes her work very much.  Unfortunately, there were also some very unpleasant observations made of everyone who is in work and is paid a salary/wage, regarding their lack of moral character, and that was a shame.  It made for an intriguing thread though.

Moving on to today, B&A should be round for lunch and I will be getting out that chestnut and lentil soup that didn't get used on Christmas Eve.  I hope it is nice!  And I have some planning to do too, as always.

Photo:  more lichen on a tree at school.  Fascinating colours and shapes, aren't they? 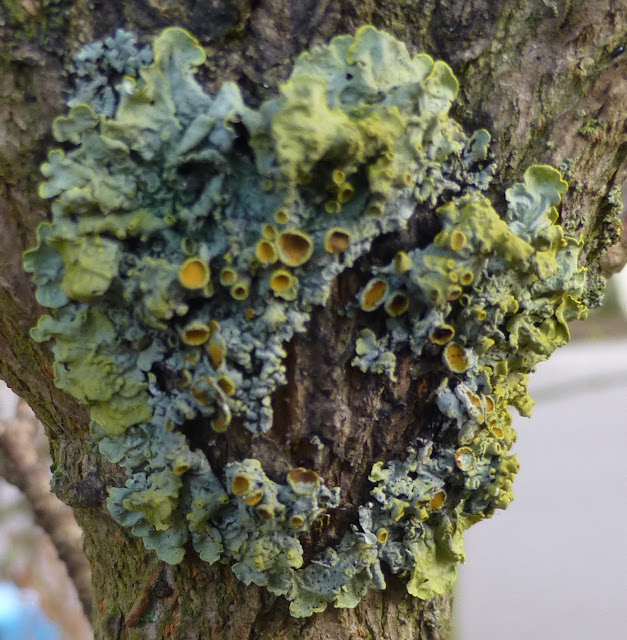