For the first time ever, I went to Hobbycraft (finally) and was disappointed.  While I was waiting outside for the doors to open I saw that yarn was three balls for the price of two.  Goody, thought I, excellent.  But when I got in and up to the yarn shelves they had a very limited stock and - wait for it - only one ball of the red I needed and none - NONE - of the green.  I was so disappointed.  I got the one ball of red anyway and some more red and green from a different name in hopes (and it was cheap) but when I got it home, inevitably it didn't match.  Close but not close enough.  Darn it, thought I, what to do now?  I wasn't about to give up on the Christmas throw, no way!

After some thought including a mental whinge about the lack of knitting shops in Chelmsford (apart from Hobbycraft, of course), I got onto Google and found a site that had the yarn I wanted and loads more.  A veritable treasure chest it was, I could have gone totally bananas but  you will be glad to know that I was very restrained, and just got what I needed.  The dye lot will be different, of course, but that shouldn't matter as I'm doing squares.

So what did I buy in Hobbycraft?  Well, I got the substitute wool, as already stated, plus the ball of red they did have and some more white (although I don't think I'm going to need that, but just in case) and I continued to restock my crochet hook stock too.  I have (or had) a box of crochet hooks somewhere but when I looked for them recently I couldn't find them anywhere.  I searched all over but no luck.  Of course, as soon as I have bought the last replacement hook the others will turn up again, won't they?

Yesterday I said that all the snow had gone but I was wrong.  Sitting bravely in next door's front area was a very brave and rapidly diminishing snowman.  When I got home again he was all but gone.  Sic transit gloria mundi!  (I wonder what is the Latin for 'glory of the snow') 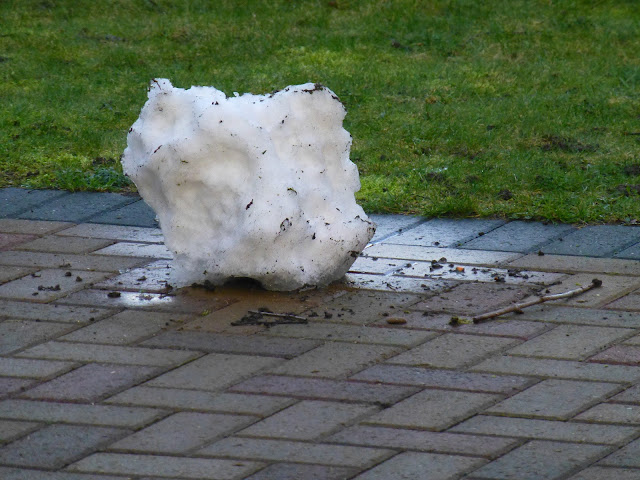