Heigh ho, heigh ho
It's back to work I go . . .
At least, that's what I am assuming anyway.  I'm not looking forward to it.  I know I only live at the back of the school but the pavements will be nasty and our road is not gritted.  There's no way I'm taking the car so fingers crossed I won't break an ankle on the way (OK, so slight exaggeration there)

I feel for my student.  Having a day off has played merry wotsits with the timetable and I'm shifting a whole lot of stuff round so she can teach what she has planned to teach.  Normally, if I were teaching, I'd just shrug it off but given that they have to produce four pages of planning plus a TA plan, I really can't just abandon any of her lessons, can I?

I made a lovely butternut squash, chicken and lentil soup yesterday.  This is what I did.
I cut the squash into chunks (unpeeled) and took out all the seeds.  I roasted them in olive oil with one onion cut into segments, until soft and a bit charred.  I then scraped the flesh from off the skin (discarding the skin) and put the squash and the onion, plus all the charred bits in a saucepan with the stock from the chicken carcass, two handfuls of lentils, some mixed herbs and some pepper.  No salt because the chicken had been brined and that seems to season things just perfectly.  I boiled it all up, zizzed it and then pushed it through a sieve.  After checking the seasoning (just right) I added the bits of chicken I scraped off the boiled up carcass plus some other bits from the carving as, even with super sharp knives, I can't be called a good carver and there were shaggy bits as well as nice slices.  I cut them into little bits before popping them in.
I had one portion for lunch with bread and butter, another portion will do for lunch at school today and another tomorrow.  The last portion can go into the freezer.
No pies - I couldn't be bothered!!  Lazy toad, that's what I am.

I did get on with the throw though, until I found I was getting short of yarn.  I ummed and ahed about braving the elements to go to Hobbycraft because I know the main roads are clear, but decided not to.  So I finished the square I was on, got out those huge size 20 needles and the other ball of shaggy yarn I bought after Christmas and knitted that second scarf.  it took - ooooh - all of two hours, maybe a little less.  Might wear it today as I brave the Arctic elements!

Photo:  some of what I've done so far.  The colours aren't quite right on the photo though! 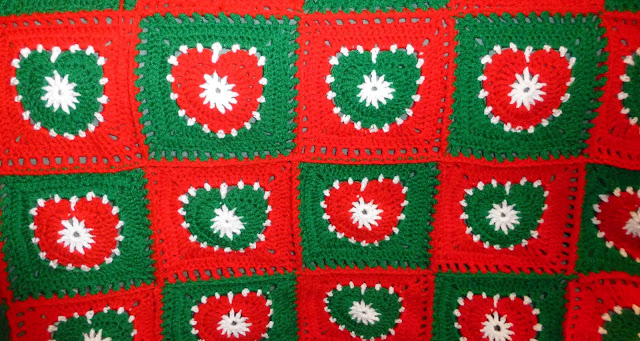