Morning, everyone.  What a lovely night's sleep.  It has cooled down considerably and it was bliss to be able to snuggle down under the quilt again after having to sleep on top for so long.  I opened both French windows earlier and have closed one again!  It was so, so hot yesterday lunch time and afternoon, or maybe I mean humid, rather than hot.  Uncomfortable, anyway.  It is lovely now.

It's been a very busy old week and I am so glad that today is an empty day - nothing in the diary at all.  OK, the cleaners are coming to do downstairs so I have a bit of tidying up to do and I'm going down the allotment this morning but that's not the same.  I'm feeling footloose and fancy free - no teaching, no meetings, nothing but things I choose to do.  Splendid.

Beth and I worked on weed attack yesterday.  It took a while because we removed the netting from the peas, gently cleared the weeds from around them (we had to be so, so careful), tied them up against the canes, creating a sort of trellis so they climb up against that rather than up the netting, and then replaced the netting.  I know the weeds will be back - it is now the bindweed rather than the ground elder that's the big problem, but patience is a virtue and we have plenty of that.  While we were doing that, there were a few drops of rain and while we were having coffee it intensified so we cleared and left.  Sadly, it didn't come to anything so it's still watering cans at the ready!

Today we are planting on the four runner bean plants I have left, making a sort of wigwam for them to grow up.  We won't get much from them, I know, but it's better than throwing away the little plants (and it will look as if we know what we are doing!)

We've been taking regular full view photos of the allotment so here's some showing progress, to bore you!  :-)

The beginning of April - oh, dear!  No wonder the chap next door (to the left) wasn't happy. 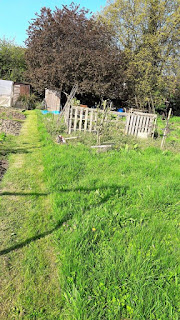 Starting to attack the weeds.  We did the front first to make the whole thing look better! 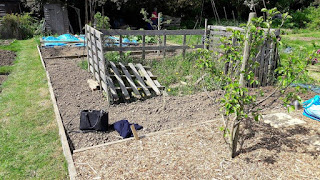 Some of the cage has gone, the weeds at the front are being held back, and we've started attacking behind the cage. 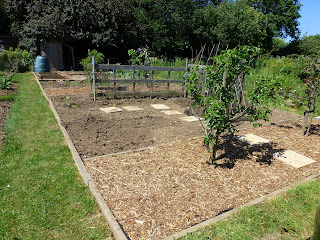 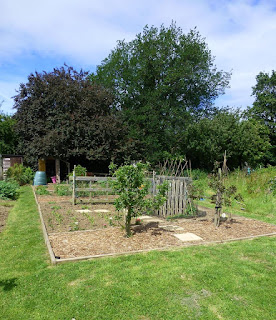 Taken on Wednesday.  Everything is coming up well (including those pesky weeds) and it's full of hope! 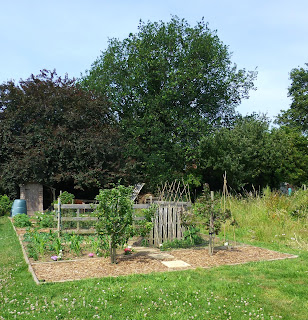 Better stop - I have a living room to tidy before I have my bath and get dressed and then an allotment to tend!  Strimmer day today!


Edited to add one I took an hour ago.  Different angle. 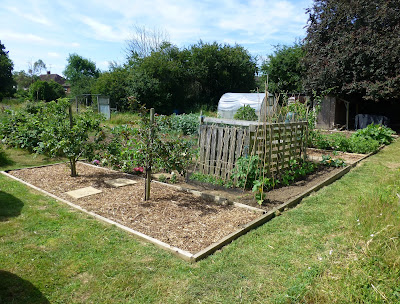