Good morning, everyone.  We have sunshine this morning and, actually, yesterday wasn't nearly as bad as it might have been, weather-wise.

I turned up to the meeting but found it had been cancelled (illness).  They had phoned me and left a message but I didn't pick it up and phoning is useless for me before the hearing aids are in - I just don't hear it at all.  That's how deaf I am so thank goodness for technology or my world would be a very isolated one.

With the feeling that I had just been handed a free day on a plate (Y2 was out so I wasn't needed pm either), I did my civic duty and then went home.  I decided to use the time gift well so I set to and got all of next week's tuition planned and ready.  I'll have to read through it again and might tweak bits but that won't take long.

I also tried something out.  I had bought some strong rubble sacks (plastic bags but thick) and I had some sprouting spuds so I have planted the sprouting potatoes in the bags and punched drainage holes in the bottom.  They don't look very professional but, dear me, it's worth a try, isn't it?  I gather it will take three months (if it works).  Two of the three bags have Charlottes and one has King Edwards that had sprouted in the fridge.  Goodness knows if the latter will come to anything but the Charlottes should as they are doing fine in the allotment.

The one on the right needs more soil and I will have to buy some this weekend.

I then wandered around pulling off side shoots on the tomatoes, noting the flowers, real flowers, on the montellos, counting the blueberries (five!) and picking more strawberries.  I now have three pots of jam, really luscious home grown, home made strawberry jam. 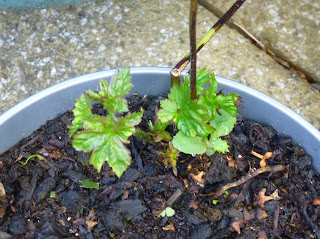 I thought I'd managed to kill the Japanese anemone cutting I took for a friend but, to my delight, when I looked yesterday, it is very much alive and sending out new shoots.  Phew!

Today I have a 'free' (ha ha) morning and a friend is coming round for the afternoon.  It's downstairs cleaner day too, so I need to sort out the mess in the kitchen.  The tuition is all finished for this week so I can relax and enjoy the sunshine if there is any.

And don't we live in 'interesting' times?