I thought I was having a couple of friends to stay last week but it got put back to this coming week because of me feeling unwell.  As I had bought some turkey mince for dinners (very versatile, turkey mince is), I decided to casserole it all up with vegetables, lentils and chopped tomatoes, with herbs from the garden (yay) and other stuff.  It's now in a slow oven smelling rather good.
I had intended to make meatballs and a sort of doner kebab thing as well as a lasagne mix, but I don't have the energy right now and it has to be cooked.  Never mind, there's a lot that one can do with a tasty savoury mince mixture - cottage pie, lasagne, cannelloni, a pizza topping, pie, on its own over rice or mixed with pasta and topped with grated cheese . . . oh, the list is endless.  Oh, and for school lunches, to be heated up in the microwave too.  So I don't think my friends and I will go hungry in the slightest.  :0)))  And given that it will be in the freezer, once cooked, if by any chance they don't come there will be no waste either.  Excellent.

Later on:
I'm pleased.  Out of two packs of turkey mince and assorted fridge and store cupboard ingredients including tinned stuff I have . . .

One lasagne, big enough for four, so if the three of us don't scoff it all, I can have some for lunch the next day 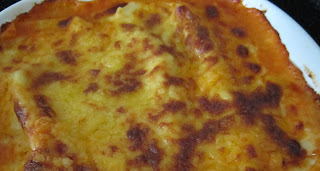 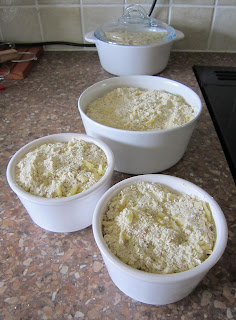 And a pot of each kind of base mixture for whatever else.  I will think about what to do with that - there's more there than it looks.  The turkey mince mix is three very good portions, one of which I am having tonight and the vegetarian mix (the uncovered one) is two plus portions.

How's that for frugal!!!