As I said yesterday, it was very red, white and blue.  The bay now has home - I mean school - made bunting and appropriately coloured paperchains covering the more mundane displays and it looks very merry and British (and a lot better from a distance!).  They learned the chorus of Rule Britannia and the first verse of God Save the Queen.  They wrote about what they knew about the queen and seemed very knowledeable if a trifle stereotyped.  They learned about how the union flag is put together from three national flags and then coloured a flag properly to stick on a stick (only way to describe it) for Thursday's celebrations.
And they wrote their diaries (have to do SOME 'proper' work this week)

Today is sort of proper work.  A Jack and the Beanstalk dvd, discussing characters and scenes, some nice practical maths based on measures and recording results pictorially and . . .  making hats/crowns for Thursday!  Well, I did say 'sort of'.

I wish I had taken some photos of the decorations but I didn't, so here's another from the garden instead. 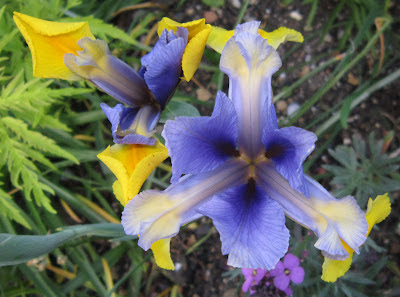