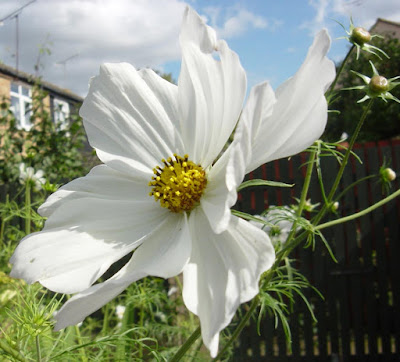 Where's the week gone? I seem to be asking myself that an awful lot at the moment. Where's the day gone, the week, the holiday - the year? Time is flashing past at a rate that seems alarming at times. It's nothing to do with being busy: after all, for the last five weeks I've been seriously un-busy and it doesn't seem to have slowed down in the slightest. I could, of course, put it down to increasing old age but I'm really not ready to admit to that yet, so it's got to be happiness and contentment that is the culprit. Days slipping smoothly by like pearls on a silken string with no knots or gnarls to slow their passage. Yes, as I've said before, I'm very fortunate.

Yesterday was a pleasant day. George came in the morning and focused on the front. There's something about getting rid of an old plant that is somewhat sad, even when it it old, past its best and dying off anyway. When I bought this house it had a rather straggly honeysuckle trained around the kitchen window. It was rather battered and the trellis supports were coming off so I cut it back to below the window and it flourished for many-a-year. Recently, it's been showing signs of a health struggle and over the summer it seems to have mostly died off. Some of the leaves turned brown and crisp and it was sending out no new growth. Time's up. So yesterday George cut it right back to bare stump and in the next few days I shall tackle getting up some of the roots. I think I have found the place for the three Japanese anemones that are going to the front. If I can work up the soil I think it will be the perfect spot and they should grow flowers that can be seen from inside, which would be nice.

I also made a first decision about a 'portable' raised bed. From Greenfingers,I have ordered a woven willow 'framework' that has a lining box inside. Not too big, so it will give me the opportunity to test the waters, see if I can keep it going with easy grow veg such as lettuce, carrots and radishes. It can't be long before these 'home assembly' beds are available in garden centres. There's loads online but I've not seen any in the shops which seem to go for the 'buy your wood and work it out yourself' type of thing, basically as a means of raising existing soil areas a little and dealing with difficult soil. I have the time, I'm not inclined to rush, so we will see!

I do seem to be going on an awful lot about garden stuff, as a friend pointed out yesterday. Sorry, gentle readers, it will all change once the term starts, I am, sure!

And finally, I was whinging about the green tomatoes (whinge - moi?) and someone said that they're rather nice fried with bacon for brekkie. I read somewhere else that if the tomatoes are tightly clustered, they should be thinned to give more growing space. I've put the two together and we will see. I don't have bacon (unless there's a bit in the freezer, I can't remember) but I do have a few sausages and some ham. Watch this space . . .