They always put a bunch of flowers in the properties on Streele Farm - this time they were lilies and were beautiful. 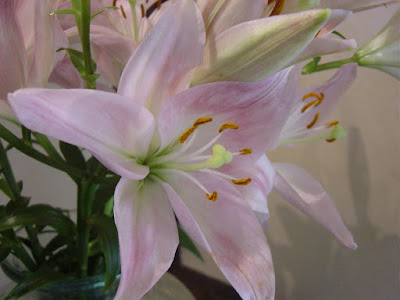 I really am back on the pleasant, every day road of little happenings again now. I had a rather lazy day yesterday after the very early start but it seems to have re-awakened my early waking pattern as I was awake again very early this morning. Never mind, I'll be glad of it in a fortnight's time.

I managed to get my shopping done and it was rather more expensive than usual. Because I have visitors for a few days I splached out on an organic chicken to roast, a half leg of lamb (hope that will be enough) and a ham which I will boil today after a soaking. I also got the ingredients to make some nice looking biscuits, the recipe for which I found in Good Food magazine. When I tell you that the ingredients include golden syrup, consensed milk, a ridiculous amount of butter and custard powder, you will realise that they are far from healthy, but they will be delicious and crunchy and, after all, I have guests!

So today is soaking and then boiling the ham, cooking the biscuits and getting the guest room ready. Oh, and talking to the tomatoes . . . :0)
Posted by Joy at 05:29