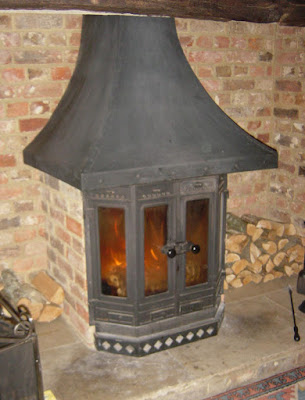 Yesterday evening it was a bit chilly so we decided to spoil ourselves and light the fire. There's something about fire, isn't there? It is, at the same time, comforting, warming with promise of food, safety and protection but also powerful, painful and hard to control. Watching a fire flickering and flaming in the grate can be as hypnotic as waves crashing on the rocks, the same and yet not the same, creating pictures that are as old as the world itself. No wonder our ancestors deified fire. I can understand why.

I hope it's chilly again tonight.

The chicken risotto I cooked last night was very tasty. I'm not so sure about the vegetable one I cooked for DD. You need a jolly good stock for a risotto and, much as I swear by Marigold (low sodium) for everyday culinary efforts, I'm not so sure about using it in a risotto. Last year I made a mushroom one which had, as its stock, the water that the dried mushrooms had steeped in and it was really delicious. I guess you live and learn! Having said all of that, I made plenty of both kinds and there was none left by the end, so no complaints really.

Apart from that we had a lovely swim and then just pootled about for the rest of the day. After a very warm morning, it gradually became more and more cloudy and by the evening it was trying to rain (although it didn't get very far). This morning seems overcast at present, so we will see. We're thinking of going to Ashdown Forest, original Pooh country, if the weather is anything like decent today, so fingers crossed.