When you're right under those towering blocks of flats looking up at them, they seem to be toppling over onto you - a most disconcerting and unsettling feeling! Taken with the mobile phone. 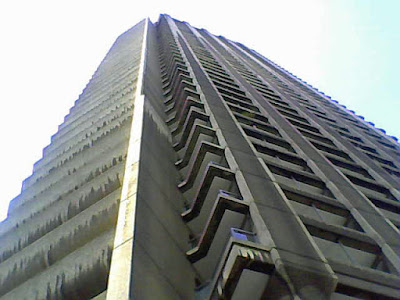 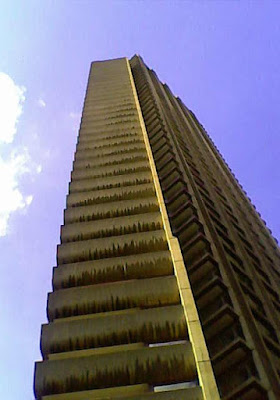 It looks as if we've had quite a lot of rain overnight. It's only spitting right now but the skies look full of it and I have no doubt there's more to come. Of course, I should have known. I gave the far bed (where the big bush had been) a good soaking yesterday as it was bone dry. That's just guaranteed to bring on the rain, isn't it? On the plus side, everything looks so beautifully green and lush rather than dusty, dry and starting to wilt. That has to be good and is very restful on the eye.

Yesterday morning I managed to wake later than usual - just before seven - so I count that as a lie in. It was a relief after the very late night on Wednesday (or rather, Thursday morning), but I was still extremely weary and managed to fall asleep at a few points during the day. Back to normal today but nowadays it's also back to waking in the dark as the nights set in earlier and dawn is increasing later.

Those tomatoes had better get a move on. At this rate we will have the first frost before I get much joy out of them and, much as I love green tomato chutney, I don't want that much. I think what they need is a spell of warm sunshine and that's just what they're not getting at the moment. Quite a lot of them seem to be starting to turn, but it's all so slow . . . I suppose I will have a huge glut all at once the moment the new term starts when I won't have the time to deal with them properly! Most frustrating. Today's little gardening task, apart from talking to the tomatoes, is to dead head some of the cosmos flowers. Oh, and to read up about the codling moth.

I did a bit more hunting for commercially produced raised beds yesterday and, my goodness, there's such a choice. Basically they split into three - a 'manger' type affair, a box on legs or a box without legs. - all in different sizes, mostly pre-treated, all needing to be assembled at home. I think I will start small-ish with one of the first two, to see how I get on with the whole concept and go from there, but whether I want a manger style (which does look attractive and has some depth in the middle) or a box on legs (bigger but perhaps lacking in depth), I have no idea. I think I'm going to trawl a few garden centres today, to see what they have in and whether there are any made up so I can see what they're like in reality as opposed to a photoshopped image, planted up to look good. If any of my gentle readers have any advice to offer, please do.