Another view of the lilies from Streele Barn. They really were so pretty by the end of the week, it was a shame to leave them behind. 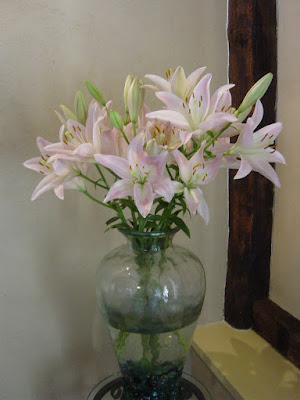 The holiday is running too fast for me to catch up. Two weeks to go now. Ho hum.

Yesterday was another sleepy day, punctuated by time spent in the kitchen and time spent with DD and DG when they came over for tea. In the afternoon I watched an adaptation of Pollyanna which was a darn sight better than the famed Hayley Mills version. Apart from being quite obviously set in England rather than the USA, it stuck pretty closely to the book and - well, I enjoyed it anyway, Pollyanna being a favourite book when I was a mere youth. I get pretty annoyed when films take on the title of the book and that's about all the similarity there is to the original. The First Wives Club is a case in point - the book was enjoyable, the film - well, say no more!

Quickly jumping off my soap box, lets move on. Today I am expecting some visitors, arriving before lunch. I've invited DD and DG over and we're having some of the ham I boiled yesterday with a salad. I'll make cheg for DD. Dinner will be a slow cooked leg of lamb (half leg, anyway), some roasties and runner beans and courgettes from the garden. If I have time, I'll make some hot fudge sauce with the condensed milk left over from yesterday and we can have it over ice cream. Yum.