I was sort of right about yesterday. It wasn't wet and it wasn't really windy but, my goodness, it was chilly. The sun made an appearance in the morning and must have decided it was far to cold to hang around! Still, we can get along without sunshine so that's just what I did. After doing a weekly shop, I set to and started the preserving session off by sorting out the apples - not that they needed much sorting, they were quite obviously not windfalls as they were in beautiful condition. This takes the pressure off a bit as very few need dealing with straight away. 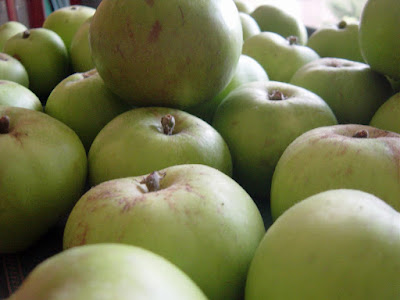 I then set to, to make the first lot of chutney, spiced apple chutney, which I have made before and which is very good once it has matured. I finely chopped some onion (I used red onion but you don' have to) and scoured my cupboards for 'Christmas fruit' - that is things like dates, prunes, etc. I found some rather hard prunes which I chopped, plus some chopped dates and made up the weight with some raisins. I mixed them with the onion, granulated sugar and the spices (ground coriander, paprika and mixed spice) and left them for a time while I cored and chopped the apples. 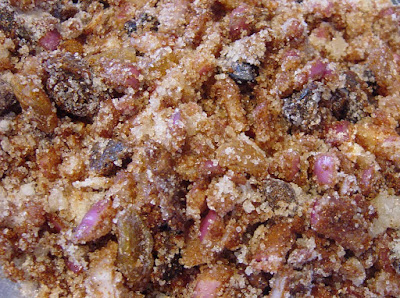 Just a word of warning - never chop apples with a new knife! While I was shopping I decided that, as my short knives are getting kind of old and lose their edge quickly now, I would buy a new one. It's lovely, my new knife, very sharp, but my technique is geared to less sharp knives and several times I nicked my fingers, nothing worse, just because I wasn't prepared for such easy cutting. I reckon it's not a blunter knife that is dangerous, it is when you change from an old to a new knife! Anyway, no harm done!
Once the apples were ready I added them and some malt vinegar to the mixture, heated it slowly, stirring until the sugar had dissolved and then just left it to simmer gently for ages and ages. 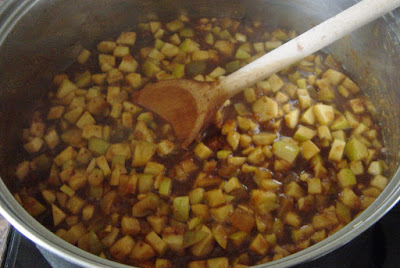 Chutney is so easy. There's none of the rolling boil, testing for set, watching carefully, etc, that you get with jam making. You just let the whole lot simmer gently on the lowest heat possible, stirring occasionally to prevent sticking, until it is all gooey and thick and when you stir it, the stirring space doesn't immediately fill in with liquid. It's a very kind process. 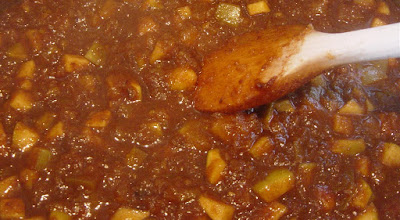 And when it is ready you simply ladle it into the jars that you will have remembered to wash and heat in the oven beforehand (cough, cough) and screw on the lids. And there you are - seven pots of what will become a wonderfully flavoursome mixture to have with cheese, cold meats, hot meats . . . 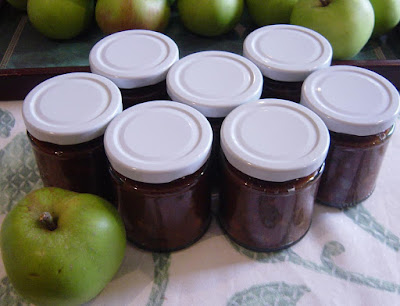 . . . and that's the only downside of chutney. The best chutneys need time to mature. Some of these are intended as Christmas presents and it will be ready by than, but the longer you leave it, the better it gets. I have some 'Christmas chutney' (a Delia recipe) which is several years old now and it is just wonderful!


I also made seven pots of cranberry and apple chutney which turned out a lovely rich, deep red, and will also be Christmas presents. At this rate I won't need to buy much at all! I'm so glad I stocked up with little jars earlier in the holiday.