Cornflake crunchies on the upper left and gingernuts on the lower right. 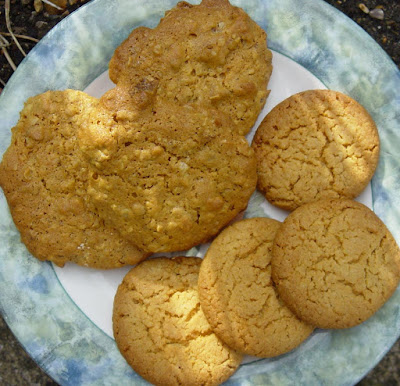 I've had a biscuit baking session! First of all I made the biscuits I mentioned earlier. Cornflake crunchies, I call them, although this time I used bran flakes not cornflakes, because that's what I hadin the cupboard. That went OK although the cooking time was a bit out and after about five minutes on the cooling rack I put them all back in the oven on a lower heat for about another ten minutes to crisp up. That worked a treat and they are really tasty.
Then I fancied making some gingernuts. Now I do have a recipe, a good old trusted and tried recipe, originally from a Delia book, I seem to remember. But I did a Google hunt and came up with one that sounded a bit different and which had cinnamon and clove as well as ginger. I should have known better, I really should! They were horrible, really disgusting, and ended up in the bin. So I dug up the proper recipe and had another go and, of course, as with all Delia recipes, they worked a treat and taste wonderful.

I still haven't learnt my lesson though. I've just found a recipe for 'custard powder biscuits': not a nice name and if it's any good I will have to rename it, I am sure. To make it worse, it's all in cups so I've had to do a conversion thing. Looks dead easy - we will see. And then I must stop because I'm going to have to freeze half of this stuff anyway!

I do love baking!