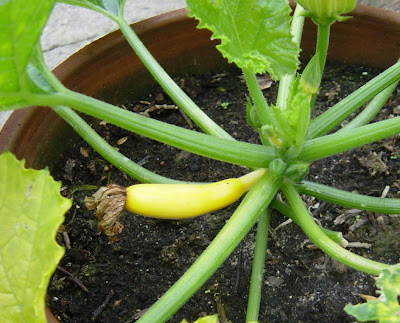 Definitely a proper courgette now. But why doesn't the plant coordinate the male and female flowers so that they're open at the same time? 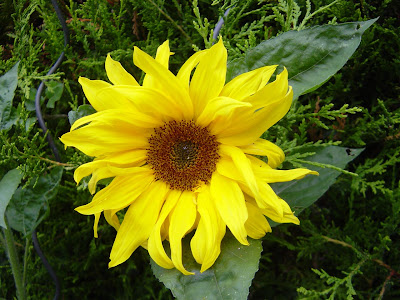 I love my sunflowers. Two out and one to open! 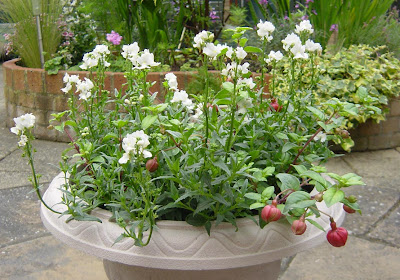 Some of the pots will look very pretty in a few weeks when the fuchsias have opened, weather and watering permitted.

I'm worn out this morning. After the three hours of duty at the school fair, alternatively being blown over by the wind and baked by the sun, I did some shopping over the road and then collapsed on my recliner at home and went to sleep. When I woke I was 'glowing' so looked in the mirror to see rather a red face, thanks to the combined effects of the wind and the sun. Out came the Nivea in short order and it's OK this morning, just one patch that looks a bit 'burnt'. I'm usually so careful about the sun, but this was mostly done by the wind as it was pretty dull for much of the time with the sun coming out for short times until near the end. Of course, the rest of the day was glorious!
I hope the fair raised a decent amount of cash. At first it was very slow but it crowded out later on when it was time for the Infant dance (Well done, J and L, it was brilliant) and remained pretty crowded for the next hour or so. Fingers crossed!!
So, on to today. I didn't get an awful lot of housework done yesterday, what with the shopping, the fair and then sleeping the rest of the afternoon away, so I have to catch up on that today. And planning! Always planning!