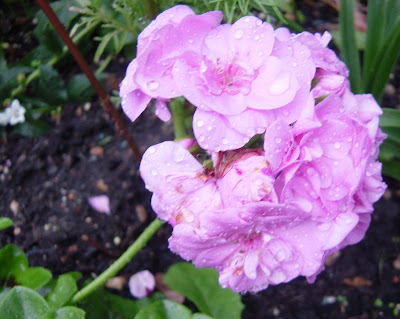 Thank goodness for a good night's sleep. After the muggy heat of the last few days the temperature dropped considerably and it was jolly nice to be sleeping snuggled under the quilt again. This morning is fresh and sunny and, at the moment, it's just perfect.
We took it very gently yesterday. Only three of my littlies owned up to sleeping well on Monday night and one of them said that they had slept downstairs all night because the bedroom was just too hot. There were a lot of weary eyed children in the school and gentle and slow was the best way to go. On top of the muggy weather they are, of course, slowing down at the end of the school year anyway.
As the afternoon progressed it got blacker and blacker outside (one Foundation Stage child said 'is it bedtime'?) and when they went out for afternoon play I stayed out as well, in the expectation that we might need to get them all in quickly, and so it proved to be. Firstly some HUGE drops of rain ('the playground has got measles, Mrs Clark') and then, suddenly, down it came. It's about fifty or sixty metres from the top playground to the school and in that short distance we got soaked! I've never heard the like of the squeals and shrieks that they uttered as they ran for shelter! And it kept up for quite a while afterwards, lowering the temperature and the humidity very quickly indeed so everyone started to feel better. Damp - but better!
Rehearsals go on apace. It's looking increasingly as if I might have to play for the actual show. Yesterday I had a very quick run through with the young lady playing 'Dorothy' on her big number, Over the Rainbow. My goodness, that girl can sing! It was stunning. I also managed to write an adapted version of 'If I only had a . . .' in D major, which I can actually play! Cheats 'r' us, that's me!!
And now I'd better get dressed and off to school for more piano practice!