Today's garden happy - because they have started growing up - well, out anyway! 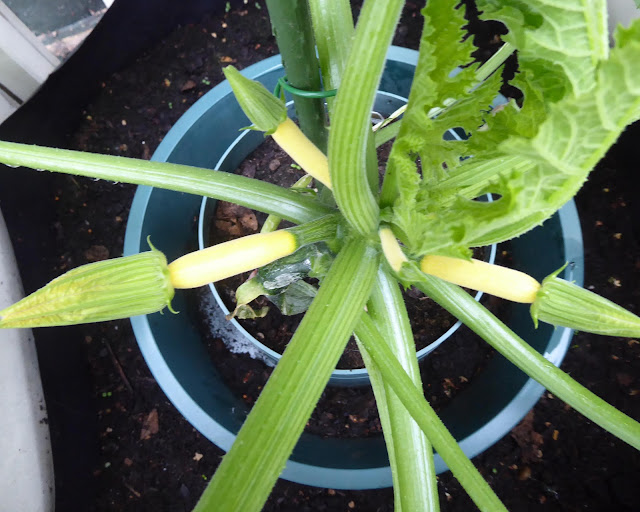 Morning, everyone.  It's cloudy this morning but the clouds are high so I'm hoping whatever it is is just the edge of something.  Beeb doesn't say rain here so fingers crossed.  I'm loving this warm, dry but not too hot weather.

Yesterday started off with the new Groove block, the routines Lindsey recorded in the freebie session last week.  As always, it was good, although there were a few people missing this week, no idea why.

When I got home afterwards, I added lemon juice to the strawberries and jam sugar and made the strawberry jam.  I deliberately didn't make much and now I have two diddy little jars of deliciousness.  Strawberries are notoriously difficult to set but there were no problems this time, it had reached setting point the first time I checked. 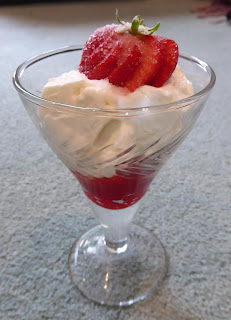 There was a tiny bit of jam that I just couldn't squash into either of the jars so I had that under some yogurt for dinner dessert and it was scrummy!
(Thanks for the idea, Cherie)
Later on I also made the strawberry gin.  I've done it two ways, one way with the strawberries chopped as I usually make it, so they will go into the bottle, and the other way by pureeing the berries.
I suspect one will come out as a clear liqueur after straining and the other more cloudy but, possibly, with a more intense flavour.  We will see.
The bottles are now sitting on the side and every time I go past I will give them a shake until all the sugar has dissolved; then they can go into a cupboard for a few months so the gin and sugar can work their magic.

Later on, I headed off into town to Specsavers to pick up a few things and to let the audiologist know there are issues with one of my new aids.  The left one only holds its charge for about twelve hours before dying on me, which is nowhere near long enough.  Given that the same aid shows extreme sensitivity in other ways too, I though it worth mentioning and I'm glad I did because he's ordered some more for me.  I was a bit taken aback by this but fair enough - they are brand new, covered by warrantee, and should not be having any problems so early so the chances are it's a faulty one.  So I have to go back again, probably next week!
He also gave me back my older aids which have now been reconditioned with new batteries, etc, before their warrantee time runs out, plus a remote control I had ordered, some freebie batteries, etc.  So now I am incredibly well off for hearing aids instead of having a little nagging worry inside me all the time.

I take the new battery ones with me in my handbag in a neat little carrying box so that if there's problems, I can switch over.  Overkill, perhaps, but it's very scary and isolating without hearing support in public so better safe than sorry any day of the week.
And I am incredibly thankful and grateful for modern technology and the wherewithal to be able to afford this level of security.
(Sorry for going on - I'll stop now!)

Anyway, I then popped into M&S and got a few more things than planned, but I was very controlled and said no to a nice pair of white trainers that were calling to me because I DON'T NEED THEM (shouting to myself here).

That was the busy part of the day over and done.  I came home and pretty much chilled and pottered for the rest of the day and very pleasant it was too.

Today there is nothing in the diary but my personal training this afternoon.  I thought I might go raspberry picking at Lathcoats but I don't think I will, I still have raspberries in the freezer from last year.

So today is going to be housework day, I think.  Time to do a bit of work!  Has to be done from time to time, after all.  There's not a big mess but there are thing to put away and things to sort and, maybe, gift on.  I need to put my emotional foot down a bit.
Do you stack things up until you're falling over them and then tidy them in one fell swoop, or are you much more organised than I and put them away straight away?

The only other thing is that we're hoping to get some dates regarding Dad's house today so fingers are metaphorically crossed.

All the best, have a great day and, as always, stay safe, well and happy.  xx