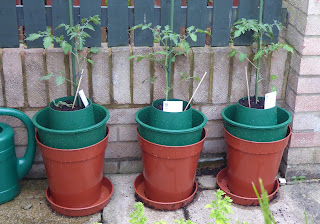 Let's start with the tomatoes.
I'm so glad I got the sungolds potted on early Saturday morning.  They haven't wilted in the least and seem very happy.  They're not as far on as the others but they will catch up, I am sure 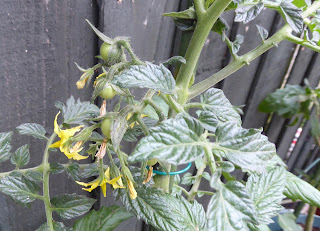 The first fruits from the first tomatoes I got from the garden centre.  This is a Black Opal so it should look interesting.  I'm looking forward to my tomato bowl with red, yellow, orange, black and 'shimmer', all different shapes and sizes.  Salads should look great! 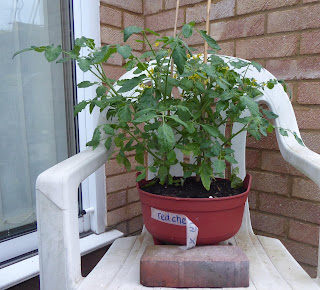 Two of the plants from Julia, looking very happy.  There's loads of flowers so fingers crossed.

Must feed the plants that have babies today - no, Cherie, NOT with babies! 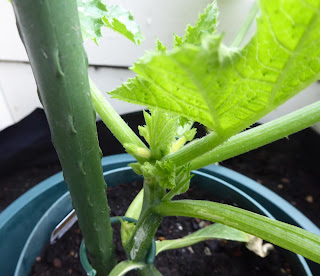 Can you see the baby yellow courgettes?  It's a bit hard to tell but they do look like females, rather than the males you usually get first, but I should know for sure in a few days.  Again, it's looking very happy at the moment. 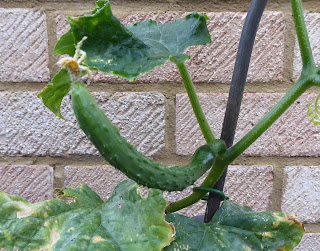 The first cucumber.  It's not around four inches long and growing fast.  There are also plenty of smaller ones starting too.  It will be so nice to cut my cucumbers rather than buying them.  They last so much longer and taste so much nicer. 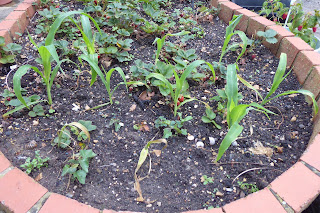 Sadly, two of the ten corns didn't make it - you can see them front centre and left.  The others look jolly sturdy though and eight plants should be enough for one with a few for the freezer, fingers crossed. 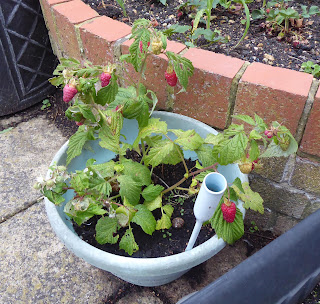 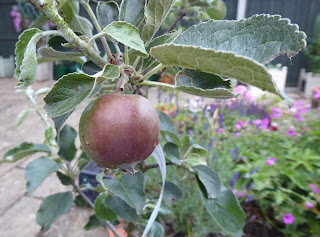 . . . and one of the Braeburns.
I took a photo of the Flamencos but it turned out all blurry. 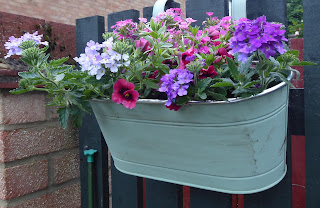 And the flowers.
Looking lovely and just starting to trail. 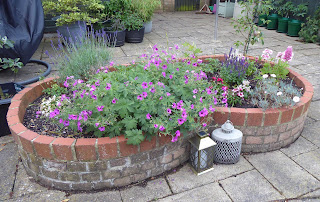 The middle bed is looking far more as I want it to be now.  Once the Japanese anemones start flowering, it will look great. 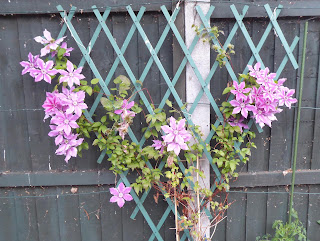 The flowers on the clematis look lovely but the leaves are poor.  I'm going to use some of what's al the bottom of the compost bin to feed the soil a bit - I reckon it's starving, poor thing.
I looked at Dad's.  Apparently, it was lovely but, as it hadn't been tied up. it had trailed all over the patio so Gail cut it back.  The bit that is left looks healthy though, so fingers crossed for next year and the new owners. 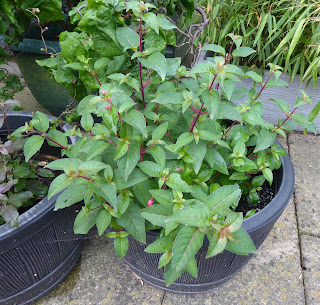 There's a few flowers showing on one of the fuchsias.  The other is always a bit later.
I forgot to mention in my blog but I took some cuttings from Dad's fuchsias.  Ever since he and mum started living there (in 1970), there have been fuchsias at the front, under the kitchen window.
I took the cuttings and, hopefully, one of them will go in the space at the front of my house - not quite the same spot as there's no room under my kitchen window but just a bit further along.  If more survive, they can go in pots for now. 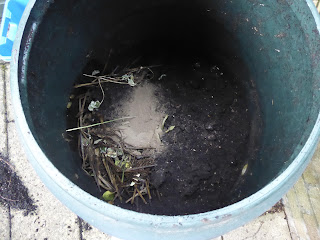 And finally, the inside of the compost bin - aren't you lucky!!
You can see that it is pretty much empty now so I can lift it up, get all the remaining well rotted compost into pots or on top of older soil (like the clematis), etc, move the polythene to where it is going to have to go, pop the bin over and start off a new load of potential goodness with the little bit that's not rotted yet.
It has to move for the same reason as the clematis - because of the planned garden room.
The grey, by the way, is charcoal ashes.
I've gone from despair at the way it all looked to satisfaction in three weeks.  Amazing what a bit of hard work and a bit of spending can do!