Morning, everyone.  I don't have a garden photo as I wasn't at home yesterday but here's a blast from my past - a double blast, in fact. 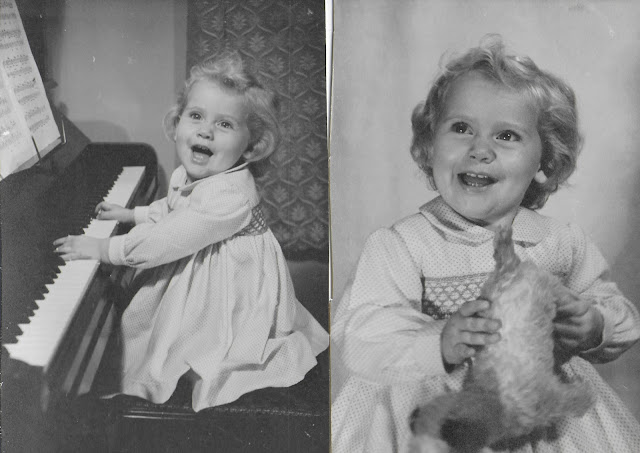 Here's me, cute as anything, wearing a little dress my Mum made and smocked.  She made pretty much all my clothes, both sewn and knitted (not undies or socks though), including coats and little mittens and gloves.

In the first photo, I was copying Dad -  as soon as I was able to sit up, he used to sit me on his knee at the piano and let me 'help' while he played.

In the second photo, I gather I would NOT hold the toy dog the right way and every time they turned it round, I turned it back again!  I reckon that's my early 'You can't make me' look.  Little show off!

After the heat of Friday, yesterday was quite a turn around.  As I drove over around eight, the sunshine went, the clouds gathered and there were a few spots of rain which stopped almost as soon as they started.  If I hadn't been driving so saw them on the windscreen, I'd probably not have noticed.
However, the rain started in earnest after a while and continued on and off all day.   It was noticeably cooler too, between 15 and 20 degrees cooler.

We worked hard and, as there really wasn't much more to do, we had time to sit and chat too.  I've come home with a car load of stuff.  Rather a lot of photos to go through and sort out at my leisure (John took the other half to do ditto), a few kitchen items - little sieves, a baking dish, some opened packets and jars such as soy sauce, balsamic vinegar, etc, and rather a lot of poly bags, etc, enough to see me out, I expect!  Also a nice stiff garden broom (I was going to buy one so that's very useful).  All stuff that we left deliberately for Gail and Colin to use or for when we visited.  We only needed to make one trip to the tip and the general waste bin is full plus two bags that Ann next door let us put in her bin, bless her.  I was glad to hear that this will be collected this week - I'd hate to leave a full bin for our buyers.

John and Gina are likewise going back today with a load of stuff including Mum and Dad's beloved bird bath that Mum was presented with when she left Guiding (apart from her Trefoil Guild group which they called HOG - Herfordshire Occasional Guild) and various tools, etc.

I was all emoted out when I got home so just shoved everything inside and left it.  This morning, I've sorted out the kitchen stuff and will start looking through the photos later on.  I was going for an early morning swim but I'm feeling weary so I think I'll leave it till tomorrow and get the house sorted out.  It looks a mess at the moment.  I'm going out for lunch - a belated birthday treat from a friend - so that will be nice and the rest of the time I can sort, tidy, organise and chill.  Phew.

I doubt I will be sitting out much, if at all.  The forecast is for early showers (it's pretty cloudy at the moment) and maybe a bit of sun.  Time will tell on that one!
What was the weather like for you - did you get rain like us?  Take care and have a great Sunday.  xx