Good morning, everyone.  Welcome to the weekend and a happy Saturday to you.  After that early morning cloud, yesterday turned out gorgeous and the sun is shining already so I'm looking forward to some good weather ahead.

Mind you, the hay fever has landed.  I thought I was getting away with it this year and, certainly, it is much lighter than it used to be but the last couple of weeks have been lightly sneezy while today I did an early morning watering and haven't stopped sneezing since.  I've taken a tablet so it should calm down soon.

I read somewhere that plants appreciate an early morning water, only water midday (in the height of the sun) in the direst emergency, and then water in the evening if it is needed.  So that is what I do, hay fever or no hay fever!

I was looking critically at my little front patch.  It doesn't get the same attention as the back, it's just a mish mash of this, that and the other, not exactly a wold garden (far from it, in fact), but not planned either.
It looks nice early spring when all the bulbs are up and then it looks a right mess while they are dying off and before the summer stuff comes up.
It's awfully weedy at the moment and I need to give it an hour or so today. 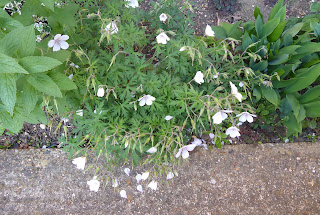 In the middle is this pink geranium.  It's been there for four years now and this is the first year it's actually earned its space.  The first year it had just a few leaves, as it was in the pot.  The next year, a few more leaves, last year quite a lot of leaves and this year it is beautiful.  The the right the lily of the valley is dying down and to the left is I know not what, perhaps self seeded but I don't think it is a weed. 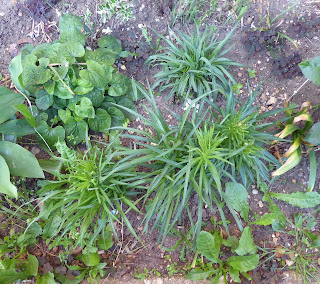 To the right are various plants - a confused dahlia that produced pink and white petals on the same flower and these - I can't remember their name but they are nice in an understated way, more interesting leaf shape than bright flower.
Kindly ignore those weeds - their time is short! 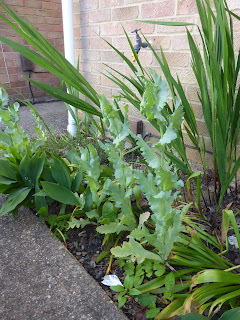 To the left is some crocosmia lucifer that brighten up what is a very dark space and around that some poppies grow with happy abandon.  Last year Jeff weeded them by mistake, this year I just weeded some but left others to grow and I think they will look lovely.  There's some lovely fat buds there.
So, today I need to weed, remove died back bulb leaves and generally sort out.  I have to be careful how much compost I add as I don't want it to go above the damp course, but this year I think it will take some good stuff from my compost bin.
It's a shady spot, this front strip; the neighbours opposite see it a lot more than I do as the only window that looks out to the front is the kitchen window and I can't see the flowers from there but it's nice to see when I go out or come home. 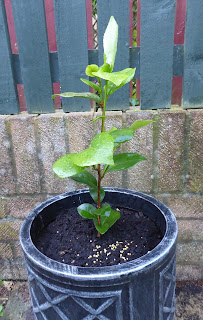 I forgot to mention this yesterday.  When I stopped tuition in May, my student and family gave me a little camellia in a pot.  On Thursday, I potted it on (it had already grown half as much again) but, I'm afraid, I have committed a bit of a boo-boo.  I didn't realise it's an ericaceous plant and I put it in compost from my bin.
So today I will take it back out and repot in ericaceous compost from a bag I have.
The bin compost can be scattered around the front.
Poor little plant - it will have to take its chance with the tap water until I get my water butt.
Yesterday was such a happy day.
It started off at Slimming World where, despite my concerns about over-scoffing (and drinking), especially at the all-inclusive Potters, I had actually lost a pound and a half since the last time I weighed at my group.  Yes!!!!!
After breakfast and a bit of tidying up, I headed off for the Riverside shopping precinct where I nosed around HomeSense (two little bowls) and Matalan (T shirt, hoodie, little footsie sock things, cropped jean style leggings and pjs) before going into the gym for a swim.
It was lovely and two thirty in the afternoon is definitely a good time to go.  By the time I had finished just after three there was only me and one other swimmer.
I did thirty five lengths (700m) in the same number of minutes.  I'm not a strong or fast swimmer so that's OK by me, albeit quite feeble in the whole scheme of things.  I'm not aiming to beat any records, just enjoy my swimming, tone up a bit, burn some calories and raise some money for GOSH.
Now I know how many sessions I need to do, how long each session will take and it is perfectly achievable.  Later on today, I will look through my diary for July and write in the swimming times.  Then I'm all ready and only need to keep going through June to get into the habit.
Come the evening, I was fighting to stay awake and gave in around half past eight.  I woke after five so got nearly nine hours' sleep.  Fine by me!
Today I need to pop to Abercorn - well, not really need, but want to see if they have any sungolds (a bit of a faint hope but fingers crossed) and to get some wire circle thingies for tying up the tomatoes, cucumber, etc.  I have some, I know I do, but can I find them anywhere?  So frustrating!
I'm going right across town because Abercorn is my best bet really.  If some bedding flowers just happen to fall into my trolley too, I won't be complaining.  It is possible that I will cross the road to Lathcoats to see if they know when their strawberry picking will start too.
Once home, I will tackle the front strip and hope to get that looking a bit better, pot or plant out whatever I happen to get, deal with the poor, misunderstood camellia and then, hopefully, sit out in my egg chair with a SW-not-Pimms and let the world pass me by.  Lovely!
I'm hoping for a very happy Saturday for you too - what are your plans?
Take care, enjoy the sunshine (assuming you have some) and stay safe.  xx