Good morning.  No rain but it's very dull right now.  BBC weather is more optimistic and, indeed, in the time it has taken to type the above, the sun is peeking through!

I must share this Little Pete photo - really, not-so-Little Pete now - needing some help to get down after being terribly brave at climbing up. 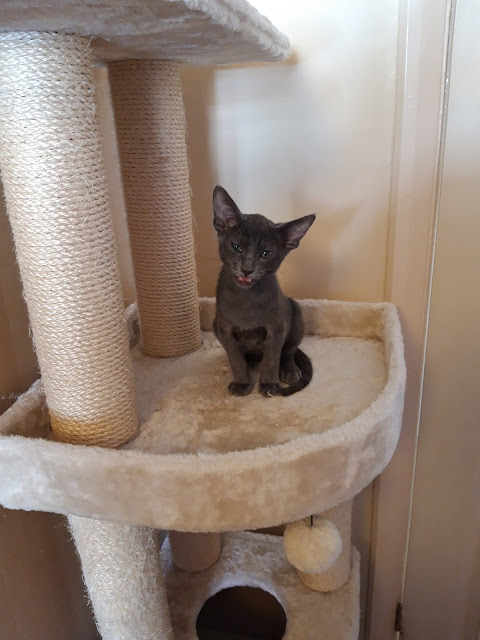 Thursday didn't quite go according to plan.  I had a really lovely chat with Chris.  It's been a while so we had loads to share and didn't really get through everything but there's always next week.  I walked back over the cul de sac clutching a couple of pots containing Alicante tomato plants which was very kind of her.

While I was making and having breakfast I dithered and waffled and wondered - should I go swimming or should I go to the garden centre and get whatever they had left to go with Chris' gift?  The problem was solved when I received an email saying a parcel was arriving in the afternoon and I needed to be there to take it in.  Garden centre it was.

They had plenty of tomatoes, loads, but some were not in great condition and some were big enough to need staking up and the stems were all bent - you know how they go.  Never mind, I had a good rootle through and got various kinds - a couple I'd never heard of, a couple of gardener's delight, another couple of Alicante (which are nice) and a mini one - I mean the tomatoes are mini.

I also got two cucumber plants that looked in reasonable state and, lucky me, they had just a few yellow courgettes too.  All these were £1.20 each or five for a fiver which is the same as last year and the year before so great value.

I also managed to find a tray of sweet corn and I fell for a pot of white campanula.

So I spent the late morning and afternoon getting everything into their 'forever' place in the garden. 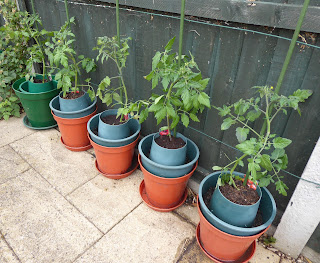 The tomatoes all went in pots with those 'collars' that act as a water reservoir as well as encouraging the roots to go deeper.  You can see the bendy stems but, apart from that, they are in pretty good nick and look happy enough this morning. 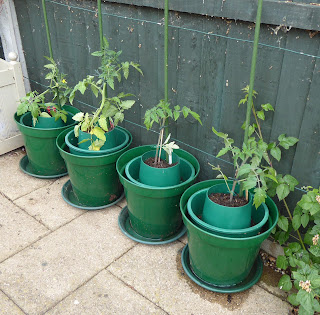 I have nine plants all together.  That's a lot less than last year but I haven't planted any on the usual raised bed because a couple of them last year got blight and I didn't want to risk the soil still being a bit infected.
I was fairly happy with the variety of tomatoes I've got but there were no Sungolds.  I really need Sungolds.  Now, I do happen to have a few more pots and collars so, if by any chance, I happened to be at another garden centre and saw some Sungolds - well, I couldn't say no really, could I?  Not that I'm going to look specifically, of course (cough, cough). 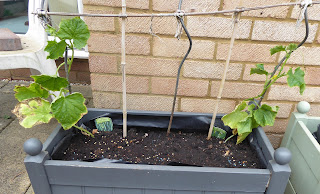 Here we are - future cucumbers.  Full sized ones this year, not mini ones.  Some of the lower leaves are a bit brown but I'll let the plants settle in before I deal with that. 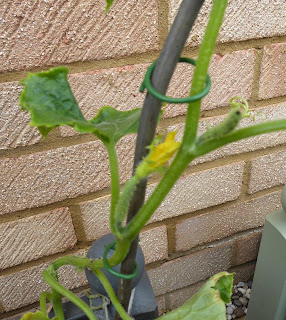 Now, I do expect these babies will drop off with the re-potting stress but you never know.  They're still there this morning. 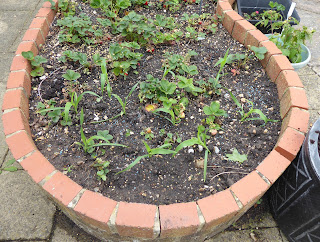 Spot the sweetcorn at one end of the strawberry bed.  I got a tray of ten so have planted them three, four, three which should work fine.  From experience, it won't take long for them to get going (unless they just fade and die).  I do hope they survive.  I love fresh corn and Dad always grew some.
I was going to plant them where the tomatoes used to go but all the strawberries have migrated that way so the other end it is! 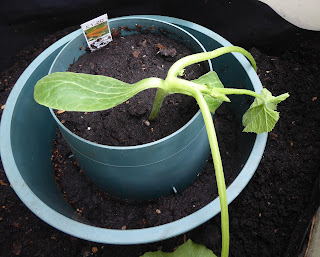 nd the yellow courgette.  I've never planted courgette in a pot but people do and they are successful.  It's a big pot and I used one of the collars so here's hoping.
Would you let it trail or train up up a cane, like a cucumber?  I'm not sure which would be best really.  Advice gratefully received. 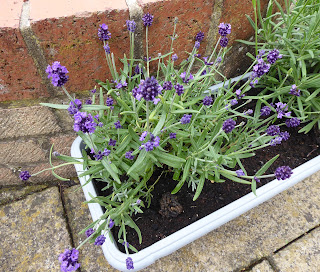 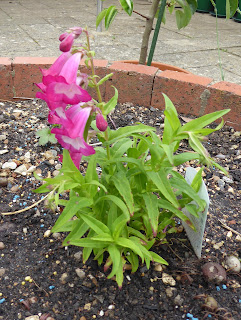 The penstemon I planted last year has come up nicely. 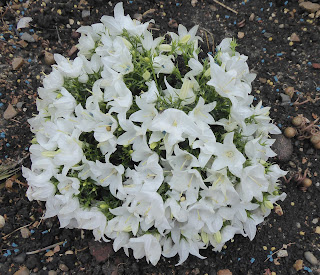 And this is the campanula.  The camera has adjusted so it doesn't look as white as it really is.
It took pretty much all afternoon to get everything sorted, finishing off my bags of potting compost mixed with some lovely stuff from the bottom of my compost bin.  I just hope the plants appreciate the fine food I have given them!
When I had finished, I felt so much better, so much more relieved and with a sense of a job well done.  It now looks like a proper, potentially productive garden again and I know Dad would say 'Well done, love, well done.'
I left a bit of a soily mess and really should have swept it all up - but I didn't.  Not long after I'd finished and come in, we had some rain so I didn't fancy sweeping up mud!  I'll just tidy things up a bit more today.
Edited to add a little vid clip I've just made.
And yes, the parcel did arrive.
Today starts with Slimming World after a couple of weeks missed because of holidays.  I'll see what the damage is and get back on the wagon again.

And then I will probably go and have the swim I didn't have yesterday.  Nice. I might have a wander around Matalan too, you never know.  And maybe HomeSense . . .
Oh, dear!!
Have a lovely Friday, everyone, and be happy!  xx