Morning, everyone!  Another sunny start after another warm and sunny day yesterday.  Absolutely no complaints from me.

I had an early morning stroll around the garden and took some more photos.  I think I am going to have to copy Eileen and post one garden happy photo each day at the moment - starting tomorrow! 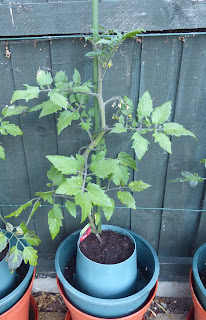 The tomatoes have all taken and are growing.  I'll have to do another tie up soon. 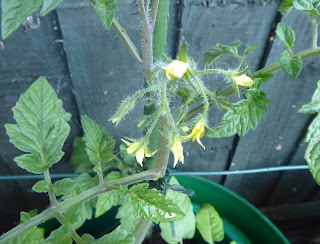 And it won't be long before the first babies appear - fingers crossed. 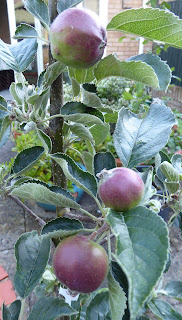 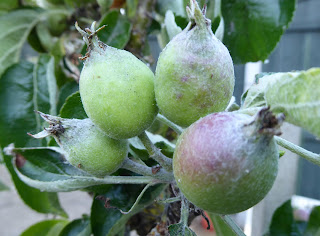 I've realised I totally forgot about the codling moth trap this year (ooops) and the flamenco shows signs of frost damage - a lot of the blossom died off and I've been brushing it down off the little branches.
The June drop has been and gone, I think, and I will be thinning out the apples soon. 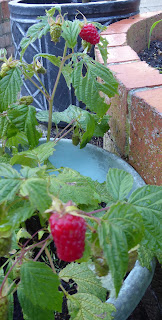 This week's big surprise.  These are definitely NOT the autumn fruiting kind I bought - or thought I bought.  Not to worry, any fruit is most welcome. 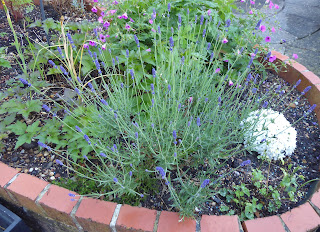 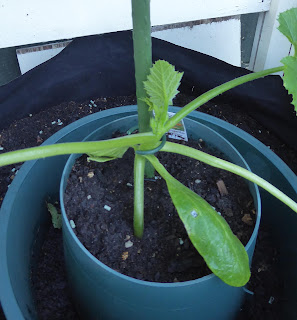 The yellow courgette looks pretty happy and has started growing.  I've not decided whether to train it up or let it spread.  Google says both.  Sue made a good point that it fruits from the centre anyway so probably I will just let it go, tuck the leaves behind the pots as much as I can and step over the rest! 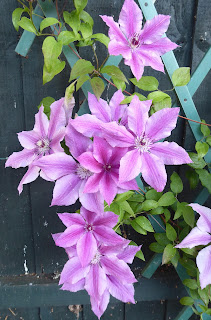 The clematis is still a picture, although I can't see it so well from the house now I've moved it.  The leaves aren't great and I'm going to do a bit of soil replacement top-up.  As my compost bin will need to be moved,  I'm using some of it up . . . which is what I should be doing anyway!  After all, what is the point otherwise?

Yesterday turned out lovely.  I had my early swim, the first early swim I have had for ages.  The Gossip Girls were there as usual, slowly going up and down and talking nineteen to the dozen.  For those who don't remember, they are a group of friends who met and used to monopolise half the width of the pool as the chatted away and went slowly up and down, making it tricky for more 'serious' swimmers.  After lockdown, (when you had to go round and round singly once the gym opened again), they stopped that but now they are back.  I had to smile - they were in twos but the first two were facing the back two and going backwards!  They seem great buddies and are very pleasant ladies; they make me smile.
As for me, I was able to use one of the narrower lanes and managed 50 lengths - 1000m.  That'll do.

Then it was home to get on with the Sunday roast for me and Alex.  The pork was already in, doing slowly, so the house smelled fantastic!
Al and I enjoyed a very good old chat over lunch and into the afternoon.

And that was the day really.  Once Al left, I did a bit of ironing and folded the swimming stuff that I had washed and line dried.

Today will be a gentle start - no early swim!  Later on there's circuits at Lindsey's and after that I might swim or I might not.  I think that, after a rigorous circuits sessions in this warm weather, a nice cool swim would be just the ticket, but I'll take my kit with me and see how I feel.

I've found someone locally who is selling her rescue hen's eggs so I am going to pick some up this evening for the first time.  Nice!

And that is about it really.  I think it will be a nice day and I hope yours is too.  Have fun!  xx