Today's garden happy  I was spoilt for choice but, as I've done a garden update for the back, this is from the front. 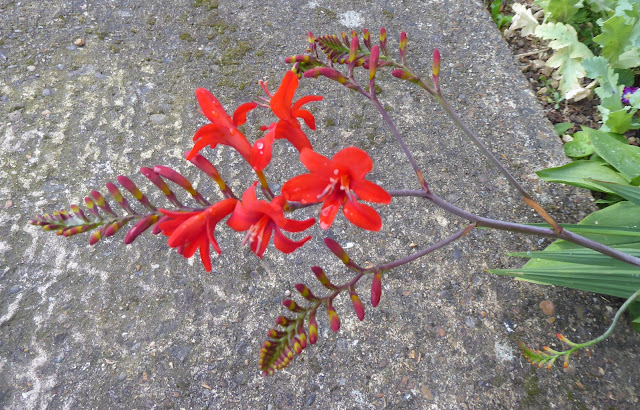 The first Crocosmia Lucifer, a tall, startlingly red crocosmia that was totally out of place at the back where I first put it so I replanted some of it (it's quite invasive) round the front where it seems happy enough.  This one has sort of fallen over so it's over the concrete but the others are more upright under the kitchen window.  There's loads of flower heads coming so it will look great!
(By the way, I am still pulling shoots up from the back bed, several years after moving it - definitely a survivor, even in my garden)
Good morning, one and all.  We seem to have had some rain overnight but it's looking promising for today.  The sun is starting to make itself known and it feels lovely and mild.
Yesterday was a funny old mixture of sun, cloud and, at one point, even a few drops of rain.  They made us afternoon cakers move hurriedly under the big canopy but they didn't amount to anything much.
Slimming World was, as almost always, a very enjoyable time.  We're a lively bunch and, with my new hearing aids, I'm picking up loads more so able to join in more.  It's great!
Then I finished off the two cakes but I'm so sorry, I totally forgot to take any photos so you will just have to imagine a coffee and walnut sponge and a fairly classic Victoria sponge, both looking absolutely delicious.  There's just something about the look of a home made cake, isn't there . . .
I had booked myself a holiday at the Potters resort in Hopton (where I went in March) but would much rather go to the nearer one at Five Lakes, now it is open.  I decided nothing ventured, nothing gained, so I got into an online 'chat' with someone there and managed to change my reservation from November at Hopton to the beginning of February next year at Five Lakes.  It's a bit more expensive but that's OK.
I have to say, the person I 'spoke' to, James, couldn't have been more helpful.  He bent over backward to be accommodating and to explain everything.  I was very impressed and gave 5* feedback afterwards.
I was relieved to have got that done.
Then I rushed off to Faith's for the Macmillan cake-fest and had a really lovely afternoon.  Faith taught with me for a number of years and she was my 'cover' when I had my coordinator time, my PPA and my management time and we got on very well.
A couple of other ex-colleagues were there too - there should have been three but one has Covid, poor lady - and we had a glorious time reminiscing about this, that and the other as well as getting to know others.
I had very Good Intentions which didn't quite hold up but, none the less, I was better than I could have been.  Faith had made a big jug of not-Pimms and everyone was raving about it, amazed at how like Pimms it is - so it's not just me that thinks that.
By the time I get home, I was shattered!  Such a pleasant day, one way and another, with a bit of achievement thrown into the mix.
Thankfully, today is quieter.  I'm meeting some others from the group for a walk from Tower Gardens to Central Park and back again this morning while this afternoon is really just chilling and enjoying the fine weather (fingers crossed).  I have books and magazines to read, meals to plan, telly and YouTube to catch up on and some washing, drying and ironing to get done - oh, and a new recipe to try.
It's going to be a good day.
How about you?  What are your plans for the weekend?  Have a good'un, whatever they are and be happy.  xx
Posted by Joy at 06:15