Good morning, everyone.  It's the last full day of my short break here at Five Lakes, the new Potters centre not far from Maldon.  It's been lovely so far and should continue to be lovely, especially as it looks like being the nicest day of the week so far. 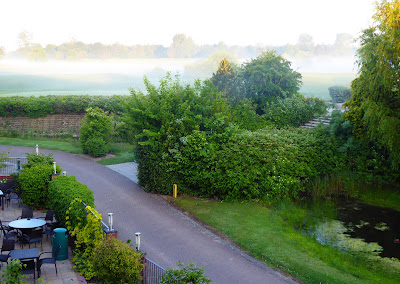 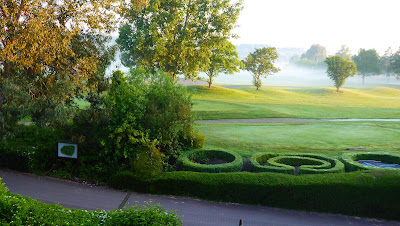 . . . and the other from my window.  The mist has now burnt off and the sun is shining brightly so fingers crossed.
Yesterday was busy.
I had a good old wander around until the fist activity, the Basic Ballet.  No, I did not wear a tutu although in all other aspects . . . well, remember the Vicar of Dibley episode?   Well, I was a lot more Dawn French than Darcey Bussell.
Seriously, it was bending and stretching exercises with some 'barre' stuff (using the wall) and by the end of it I was thoroughly warmed up and exercised, a bit like yoga feels, I should imagine, although my ankle was protesting at the toes work (no, on en pointe, just raising the heels).
There were just four of us so I don't know if they will keep it - it's early days for the resort yet and they are finding their feet.  I hope they do.
Then Lindsey and I went to the bar for coffee where D joined us and then Rob and Lindsey's dad and we had a good old chat before lunch.
After lunch I had a rest before Line Dancing (great fun) and then Dancercise (very energetic and rather like Lindsey's Groove classes)  Then it was back to the Garden Bar for a game of Play Your Cards Right before changing for dinner - no, it's not posh here, but I was wearing workout gear all day.
The evening was great.   A game of Give us a Clue followed by some croony type singing from a chap with a super voice, the pre entertainment which was very funny is parts and then the hour of Elton John songs.
And by that time, helped by - er - a few Proseccos (cough), I was ready for bed!
On to today and, after a very active yesterday, I want to take things a bit easier although it might end up just as active.
Before breakfast, I might visit the gym which has some good machines - treadmill, rower, etc, and after breakfast there's the second Wake Up, Work Out and Stretch session which I am certainly going to.
At eleven, there's a Right Royal Quiz that I'd like to do.
After lunch, I think a rest might be a good idea as I really want to be awake for the show.
Also, there's something called Strictly Potters in the dance studio - I have no idea what it actually is but I'll give it a try.  Also, I want to take a stroll down to the activity field to see what goes on there.
And I have just noticed that just before the Potters thing, there's a Silly Games Tournament in the Indoor Sports Park.
It's not going to be all that much easier, is it?
I took a few snaps of the Sports Park . . . 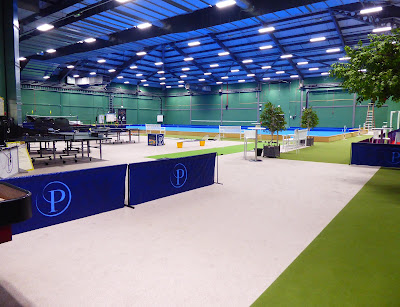 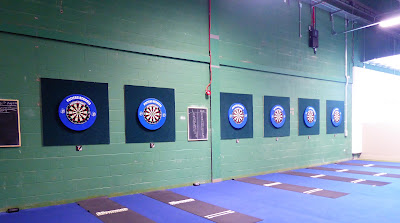 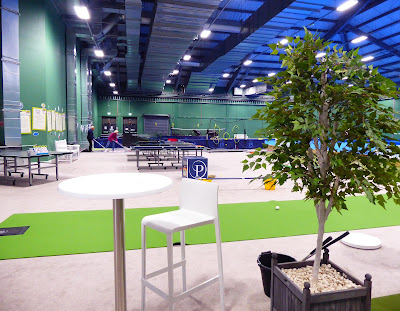 I probably won't post anything until I get home tomorrow as I will have to pack and load up the car and then, at ten, I have a manicure booked in the spa so I'll be leaving after than.  It's not far to get home and will be loads easier than coming, especially the last bit.  I wasn't the only one to find the Sat Nav had it wrong.  Very odd but there you go!
Well, I've rambled on enough now.  I'll shut this down and get the day started.  Have a lovely First Jubilee Day, everyone, and stay safe and well.  xx