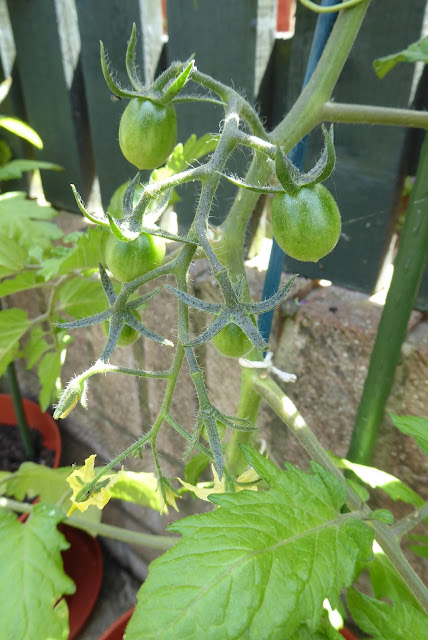 I have babies!  However, I can take no credit for them - they were there when I got the plants from Julia.  They just haven't dropped off.
Note to self - start feeding the plants with babies.
Good morning.  It really was a very, very hot day yesterday and the night started off pretty hot too  Thankfully, today looks like being much more moderate and tomorrow might not reach 20 - and we'll all be complaining that it's too cold!!
According to the Beeb, that is.
SW was rather lethargic!  The hall was OK, not all that hot first thing although I bet it warmed up later.  I got my swim in the afternoon and it was absolutely lovely, cool and refreshing.  Then, in the evening, I did myself a mini-barbecue and by then the fierce heat had gone, the garden was shady and it was a very happy experience.
Poor old John and Gina travelled down from Scotland yesterday and said it was pretty uncomfortable, even with the air con in the van.  I'm going up to Dad's to meet them there and we will finish the clearing as we are now very, very close to exchanging on the house so we need to do a final clearing.  D and K, the people buying the house, want us to leave quite a lot for them which has made our job a lot easier, and they are coming round later in the afternoon to let us know if there's anything else they want us to remove.  Other than that, there's an awful lot of photos to look through and sort out which isn't going to be happy but it has to be done.
First thing, though, before I leave for Letchworth, I have sungolds to pot on.  I wasn't expecting the collars until Tuesday but they arrived yesterday.  Cheers.
I don't have any exercise planned for today but I guess I will get plenty, all the same.
And that's today.  What do you have planned?  Whatever it is, have a good one and be happy.  xx