Good morning, everyone, and apologies for yesterday's non appearance.  I had a wonderful day - a coach trip to Portsmouth to visit the Mary Rose museum.  What an incredible experience and what an amazing museum.  Because of the dim lighting, photos haven't come out all that well so I won't bore you with loads.  What I will say is that if you get the chance to visit, please do, you won't regret it.

We had an early start, needing to be at the pick-up point quite early, before eight.  We thought we'd left plenty of time but, to our dismay, as we walked along the road, up drew the coach.  Bit of a panic there but the driver said he'd have waited as he was rather early.

The journey there was quite long, made longer by a half hour stop for coffee and loo, but J and I had plenty to talk about!  Once there, we decided to have an early lunch as neither of us had eaten breakfast (travelling tums, etc) so we had a very nice but rather dear portion of fish and chips each.  Not quite in the league of the pizza lunch we had a week ago but very tasty, all the same.

Then we sauntered along Plymouth Historic Dockyard, just enjoying the sights and sounds as we headed for the Mary Rose Museum.  We spent some time wandering around the HMS Victory, taking photos and trying to decide whether to 'do' that or the museum first.  As the latter is what we'd really come to see, we made the decision and went into the museum, brandishing our tickets!

It's hard to describe it all really.  It was all in half light in order to preserve what are very vulnerable artifacts, and there are several 'air lock' entrances/exits to keep the correct air quality stable.

The dry dock that they ship is actually in it, of itself, a listed 'thing', and until recently, the ship herself was constantly sprayed with misted water mixed with some chemical that preserves so, although you could see her, it wasn't a great view.  Then, in 2013, the misting stopped and the timbers were slowly dried out.  You have three walk pasts that make you feel as if you are actually in the ship, long corridors with the ship on one side and artifacts that were found in those particular places on the other side. They also projected images of people doing what people would have been doing in those parts of the ship at that time, with a rather ghostly effectiveness.  At each end of the walk through there were fascinating displays, focusing on the different people whose remains they found with their tools and possessions and information about what they did.
The first to walk pasts were completely behind glass, but the third, the top deck, was open (apart from a chest high glass safety 'wall' and that was absolutely amazing! 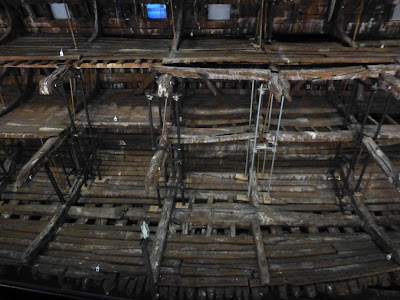 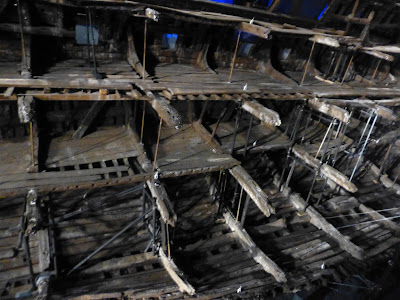 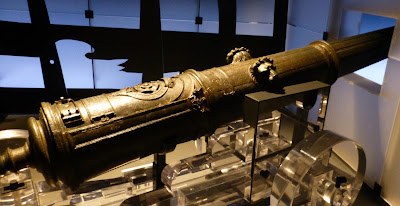 The actual ship has quite a lot that still needs to be added - a lot of the floor/ceiling boards are still being dried out and will be added as and when.

When we had finished, as we left, people were queueing to get in and it all looked pretty crowded as, unfortunately, did the entrance to the Victory, where people were being let on a few at a time and there was quite a long queue.  We decided against it (maybe another time) and sauntered back, popping into a few of the exhibitions on the way, before arriving back to wait for the coach. 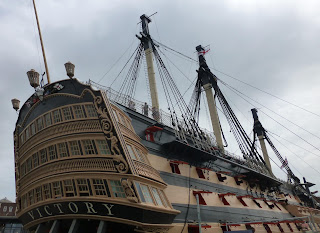 Oh, we were tired!  Conversation was definitely a minus quantity on the way home which was smooth and speedy without any hold ups.  I was intending to finish off my ironing when I got home but . . .

So that was yesterday and it was a day I will remember!  A shame it rained from time to time, but never very much and at least it wasn't baking hot.