Good morning, everyone and welcome to a bright and sunny Tuesday morning, packed with good things.

Yesterday was so busy.  We almost didn't get to the allotment as it started raining but it cleared fairly quickly so we took a change.
When there we did a bit of weeding and then cleared the other side of the shed which was overgrown with brambles and nettles.  I felt a bit Margot Leadbetter as I cut one thing at a time, holding it out in front of me, red gloved and with a 'patient' look on my face.  Still, we got it done and I was only stung twice!  We were then able to pick more plums from that side.

We also lifted a couple of potato plants (Beth's turn to take them) and there were a few mange tout and sugar snaps, just enough for one, so I had them.  So what with that, the plums and some chard, we were pleased. 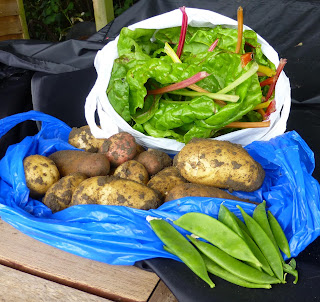 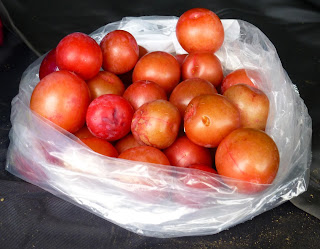 I stewed up some of the plums and we had them with custard.  My goodness, they were delicious, really delicious!

Then, in the afternoon, Beth helped me finish off the clearing.  She was such a help because there was more in the under the stairs cupboard than I had thought, much of which needed to be thrown away.  She then went with me to the charity shop where I off loaded lots of bits and bobs.  Now I just have a couple of bags of bits and bobs for the Salvation Army recycling point and it's more or less all done.  The room isn't empty, of course, I've got to live in the place, but the rest can be easily moved.

Then I did the ironing while watching Wimbledon, which was pleasant.