Good morning, everyone.  We've had rain overnight and the patio is still a little bit puddly.  That's good: it means I won't have to water either garden or allotment today.  The sky is grey after a bit of early morning brightness but the clouds are high at present.  There is a possibility of more rain but what will be, will be, so I'm not fussed.

Yesterday turned out to be a very pleasant day.  It wasn't anywhere like as hot as predicted which helped and we managed to get to Ingatestone Hall (which was dead easy to find) for the afternoon.  There's a very easy back road route that avoids the busy main roads and the only hold up was at the level crossing (both ways which was bad luck!)

Ingatestone Hall is not posh - nothing like Chatsworth in miniature, for example.  It's a family home that has remained in the same family, the Petre (pronounced 'Peter') family, since it was built in the 16th century and most of the part open to the public has been stripped back to it's Tudor roots as much as possible.  Lots of pictures on the wall, plenty of information around, some displays, some gorgeous woodwork and gardens that we didn't have time to do but which will be well worth another visit, not because they are magnificent but because they look interesting.  The Petre family has always been strongly catholic but survived all the religious ups and downs of the last four centuries or so.  There are two priests holes to be seen, one of which was only discovered when bedroom floorboards were lifted to retrieve a child's toy!

I bought a little info book in the shop and look forward to reading it today.  I took some photos as well, of course - here's just a few. 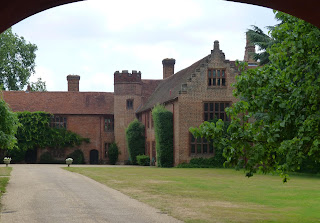 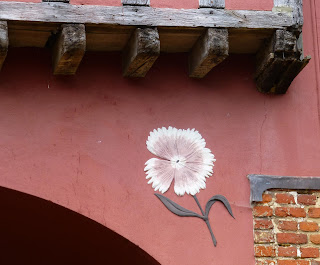 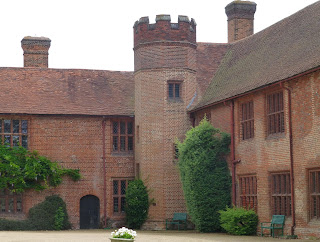 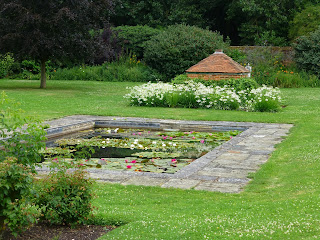 In the shop there were jars of locally made jam. one of which was called 'Traffic Jam'.  Intrigued, I looked at the label and it was strawberry, peach and kiwi - red, amber and green.  Clever!  I might have a go at that myself.

Annoyingly, my camera seems to be on its last legs.  The zoom kept 'crashing and I do use the zoom quite a lot.  One reason I bought that particular camera was because that feature was very good, but I have used it a lot over the years and technology is moving on so I guess I will be thinking of another 'lump sum' purchase now.  Ah, well.

In the evening, after tuition, I rushed on to school for a meeting which did rather go on.  Back home at eight thirty, I cooked us a belated meal, a vegetable curry, which was really delicious.  Curry does improve with keeping and I made this one on Monday, so the flavours had developed and mellowed.  All I had to do was thoroughly reheat it and cook some rice.  Lovely!

Today my friend leaves and I have some housework type stuff to deal with - sheets, remaking beds, putting stuff away, etc.  I'm not in school this afternoon as I'm not needed.  There's enough to do on the last but one day when teachers are changing rooms without random ex-colleagues wandering around, getting in the way.  However, I have several Governor reports to write so I can get on with them before the two blocks of tuition late afternoon.

And now the sun has come out again and I need my second coffee.  Have a great day, whatever your plans are.