Thank you for all your lovely, kind and comforting comments yesterday.
It was what I would call a subdued day.  I didn't get an awful lot done but that's OK.  There were a few tears on and off with plenty of memories, mostly very happy and loving, and I hope it was the same for Dad too.

Well, the algebra course is moving along.  I intend doing about an hour a day which is more than enough for me!
Because it's lifted from a longer course, it occasionally refers to elements covered in other parts but, fortunately for me, so far I've met them all in my work as a tutor, other wise I'd be totally confused with terms like BODMAS/BIDMAS.  So far, I've not met anything that I don't understand but, knowing how OU course difficulty peaks like covid 19 after the first few chapters, I expect that will change in the next few days!
It's bombarding me with mathematical definitions though and I do wish I hadn't got rid of my card index box and cards.  I have called upon Amazon . . .
How's it going, Eileen?

A major disappointment yesterday was that I didn't get my live chat with Beth for very good and understandable reasons.  Hopefully we will catch up soon.  On the positive side, I'm hoping that us four ladies wot lunch can get together for an online chat, given that there's absolutely no way we're going to be able to go out for a meal.  Even if the eating places were open, two of us are isolating for three months and the other two, while not being over seventy (yet), are being very careful anyway.

On the creative side I made this. 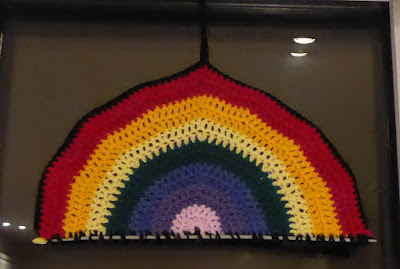 A bad photo, I know.  I tried to take one in daylight but there was too much reflection on the window and the colours were bad.
It's very rough and ready, made up as I crocheted along and the thing at the bottom is a knitting needle because it needed something to keep the shape and I don't have any dowelling.  You can't see the needle from the outside - from a bit of a distance, it looks fine!
I just wanted something a bit more individual than a computer print out.
Now I am wondering about making some smaller, firmer, rainbow circles to hang as well.  Done with a smaller hook, they might hold their own shape pretty well.

Today's maybe plans:
Something energetic:
An hour of personal training via live link with Lindsey.  I might do PE with Joe later on.

Something social:
Apart from the PT thing which fulfils a social need as well as being physical, it's the first online Slimming World meeting tonight using Zoom.  I have no idea how much I will be able to be involved, it all depends how organised it is.  If several people talk at once, I won't be able to hear, but I can live with that.  It will be lovely to hear other voices and faces.

Something in the house/garden:
I may have abandoned tidying up the jumper cupboard for now but I notice that my T shirts are in a right state of disorder and I can get that done as it's not a case of 'what do I want to keep', they just need tidying and re-sorting.
Some weeding.
I rally fancy making some bread today but I don't NEED any.  Ho hum!

Something relaxing/creative:
I've finished the first pair of socks made with the new yarn - I'll try and remember to take a photo.
I've dug out a few possible patterns for the top but am not sure if I have enough fabric so I have a bit of fitting and manipulating to do.  Maybe, if I do the sleeves sideways and make them short (which was my intention anyway), it will work.  We'll see.  I'll try to get that done today.
Plus, of course, knitting and crochet.

Alongside all the usual daily stuff, that should keep me occupied and happy today.