Yesterday was interesting.
I met with Jeff at the allotment, let him in and arranged when to come back.
Then I went off to Slimming World which was very, very quiet indeed but I was glad I went as I got slimmer of the week and won the raffle which was this. 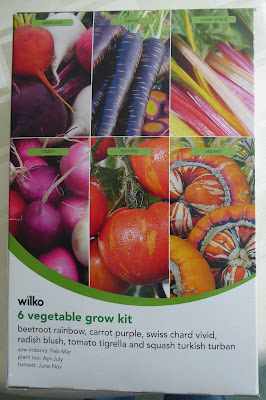 Useful for the allotment, don't you think?  I will get them planted indoors at some point this week and, if they grow well, they can go down the allotment and if not, they can go in pots in the garden.  Win-win and a very good raffle prize for a slimming group!

After the meeting, Jennifer opened an email that said that all SW meetings would be cancelled for three weeks (at least) so I'm jolly glad we got yesterday's in.  We'll have to keep in touch via our closed Facebook group instead.

I went back to the lotty to pay Jeff.  He'd done the larger part of the heavy digging but there's more to do (it was harder than he expected - I could have told him that) so he might be back next week.
I came home again with an armful of early rhubarb - lovely!

Tuition was fine, no problems and the rest of the day was good.  I've done what I've been intending to do and signed up for Netflix so there's no lack of stuff to watch when there's little else to do.

Today, personal training with Lindsey is still on as it's pretty much a safe thing to do and I know Lindsey is meticulous with hygiene while, in the evening, Dave's coming round which will be nice.  He's in the 'high risk' category too and is working from home at the moment so we should both be OK with each other.

In between times, I would like to take all the stuff out of my sewing cupboard, sort it all out and put it back in an organised way.  It won't last, of course, but it will be good for a while.
I've decided that, while stuff is cancelled and I will be at home a lot more, I ought to have one clearing out/tidying up/getting organised thing to do each day.  In the last hour, I've sorted out the tins and packets cupboard in the kitchen so now I have a clear picture of what's available.  When things like chopped tomatoes are a regular on your shopping list, it is too easy to build up too much of a supply and right now that's not a particularly thoughtful thing.
So, instead of filling my diary with places to go to, I will fill it with the daily spring tidying project!

On that positive note, have a good day and stay safe and well.  xx