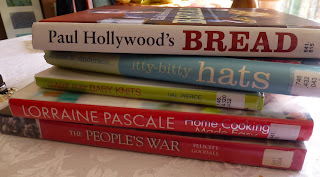 After a day that swung from one weather thing to another, sunny, then dark, dry, then lashing, calm, then very gusty, this morning it is, as far as I can tell, dry, quiet and pretty chilly.  It has that 'cold' smell, if you know what I mean.

Yesterday was an interesting day in a quiet, homey sort of way.  First of all I went swimming but Beth didn't as she's not feeling too wonderful and stayed home in the warm all day, sensible lady.  It was quite busy and I realised I must be getting faster without realising as I was overtaking several people.  Not fast enough for the middle lane yet though!

After swimming I popped to Morrisons to get some stuff I couldn't get in Aldi and then I had a go at making that microwave tomato risotto.  It was a great success, really delicious and I shall be having the other half this evening.

Later on I had a go at something I picked up at the Thermomix demo thing I went to just before term started - poaching a whole chicken in the thermomix.  Poor chicken - it had the top of the blades up its bum so that it turned slowly round and round as it poached in a liquid that was vaguely Asian, adapted from the original, with soy sauce, stock, ginger, honey, star anise, orange peel and a few other tasty things.  The resulting meat was moist and tender and the stock was superb.  The recipe suggests that you freeze the stock and use it the next time but I'm really now sure I want to.  Equally, I'm not totally sure what to use it for so any ideas would be most welcome.  I think that if I reduced it down further, it would make a fantastic sauce over rice or a great soup with noodles and a few other veg added.

Apart from that I read, snoozed, emailed and generally had a lazy time.  I went through the Lorraine Pascale book and put post-its in against likely looking recipes.  There are quite a lot so it is just as well I have the time now!  I also found a recipe for using up green tomatoes in a curry.  I suspect that, the way things are going, I will have a lot of green tomatoes this year and one can only cope with so much chutney!  Also, sadly, there are no more flowers coming on the runner beans so when the currently developing beans have gone, that's it for this year.  Hopefully, next year I will get them in sooner and have a longer picking season.

Today, being Tuesday, is school day.  I think it's jolly good for me to have some routine and busyness in my week and I'm looking forward to seeing everyone.  No cooking plans, I think, although I picked up a recipe for a tomato ketchup on Facebook that I want to try.  It all depends how tired I am when I get home because it's an over two hour job.  Perhaps tomorrow instead, after swimming.

Food:
Breakfast:  Porridge with pineapple and yogurt.  Apple
Lunch:  Chicken roll, tomatoes, yogurt
Dinner:  Tomato risotto with added chicken, runner beans, pear.  I also have a couple of cooked new potatoes that need using up.  Would it be terrible to add potato to risotto - yes, probably.