Good morning!  Nearly half past six and it is starting to get light but that won't last for long as the days are rapidly getting shorter and the nights longer.  Fair enough - we're almost into November now and I must get my 'No Trick or Treat' poster ready for my front door this evening.

I'm an old meanie and, quite apart from any other reservations, I really dislike anything that says, in effect, 'give us something or we'll do you some damage'.  It's nasty and, in an adult world, it would be considered illegal, so why do we encourage children to do it?  It may be wrapped up in a lot of fun and fancy dress but that's the underlying message.
See, I said I was an old meanie!

Yesterday turned out to be a much more productive day than the rest of last week put together.  It was a slow start but I don't mind that.  I'm allowed to start slowly after decades of rush.

I added some apple, some orange juice and zest and some sweet spices to the cranberries that I have simmered the day before and simmered it all again while I searched again for my jelly bag.  I KNOW I have two!  Unfortunately, I couldn't find it.  What I did find was a lot more jam jars in another box, so that's good and now I can make the chutney as well! 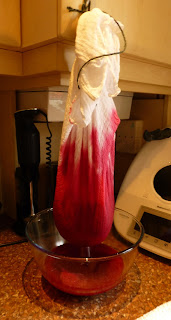 . . . is what you do.  Looks very gory and Halloweenish, doesn't it?
I will leave it to drip for a bit longer and then make the jelly, maybe late afternoon.  Then I will push the rest of the gunk through my mouli and make a jam with the rest.  Can't waste all that good fruit!

I also prepped the King Edwards and par boiled them.  Here they are, drying out and cooling.  They're now tossed (well, rolled) in semolina and flour and have been frozen.  There's twenty four of them which will be enough and to spare for Christmas dinner for six and, probably, some left over for the next day. 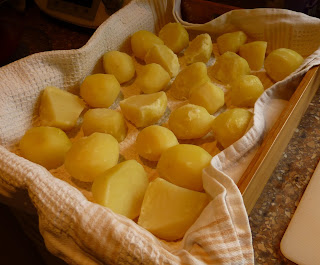 After lunch (scrambled eggs), Beth and I did an audit of what we have for the School Fair - what's done, what needs finishing and what hasn't been started yet.  Then we sat in from of repeats of Bake Off and hand stitched until we had twenty finished tree decorations.

After that, as the wadding was out, I started dealing with my cushions which are as flat as pancakes.  They're not now - well, most of them aren't but there's three still to do!

Today I will do some more sewing and I shall go shopping.  Food shopping at Morrisons (I have vouchers for points which translate into more vouchers - slightly confusing but worth doing) so I am going to start getting in Christmas stuff.  I think today it will be the wherewithal to make the pigs in blankets and the sausage rolls, both of which will be frozen until needed, of course.  I'm very thankful that I am working to clear space in the freezer.

I also want to research a 'sweet' pastry recipe as I think it will be nicer than the ordinary kind for the mince pies.

So, you see, a much more lively day planned, a sure sign that energy is returning!

So - today's food.
B:  probably marmite on toast, apple
L:  home made soup, probably split pea (from the freezer, of course), orange
D:  sirlon steak (being a bit lavish here but it is from the freezer) with home made wedges and maybe some peas.  I might make a mushroom sauce with some soft cheese that needs using up too

As I've typed this, it has grown lighter and lighter and now I can see it's a chilly, misty morning which will probably brighten into a lovely bright autumnal day.  Fingers crossed!