Good morning, gentle readers.  It's nice waking up and getting up in the darkness.  Safe and cosy, although I probably won't say that so readily when the colder weather arrives until the heating has properly clicked in.

The weather forecast is a bit of a mixed bag for today: rain, cloud, sun . . .

When Sim came to do his bit of gardening yesterday, I set him to harvesting the Montello tomatoes as, although there were still plenty of fruit, the plants themselves were in a sorry state.  He did so and look what I have to deal with. 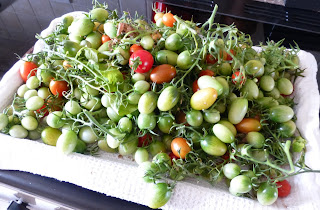 Some will ripen, of course.  I have sorted them and already some in the 'green' bowl are not so green any more, but ho! for green tomato chutney!  I am short of jars so need to go searching in the garage.
Despite an uncertain beginning and a late start to ripening, these Montellos have been wonderful and I'm hoping to grow some again next year - two plants will be more than enough and I will have space up the fence beside the tayberry to train them.

The tayberry itself has definitely survived its difficult beginning and I have two definite stems that will bear fruit next year plus one that hasn't grown much but might next year.  It's a good start anyway.

To go with the sausages yesterday evening, I made, in Thermione II, a chunky sauce with onion, red pepper, mushroom, garlic, tomato puree and a couple of the giulietta tomatoes with some veg stock paste and some balsamic vinegar.  It was jolly tasty and there's some left over so I have added it to the left-over runner beans, will thaw out some pulses, probably chick peas, and, Bob's your uncle, there's my dinner!  I might cook some pasta, I might defrost some rice or I might have it just as it is with some fresh bread.
I suspect there's enough for two there, especially after adding the chickpeas, so I can ring the changes tomorrow!

I didn't get started with the yellow room yesterday but I will today, once Alex has gone home.  I really want to get it done in geed time.  The other thing I want to do, quite apart from the usual bread making, is get one of the chutneys made.  I have two lots to make, a spicy apple and a green tomato and, as it's a fairly long process, will need to start whichever one I do first this morning rather than leaving it until after lunch.

Last Tuesday, a friend gave me a bag of 'heritage' type tomatoes (in other words, a bit different looking).  When she and her other half were in Italy, they had some wonderful tomatoes as part of a meal and they saved some of the seeds, growing them this year.  It was highly successful and the fruit was true to type.  They are a truly delicious 'black' plum tomato so I have done the same thing - taken some seeds for next spring.  I looked up what you have to do as I vaguely remember it was not as simple as just taking the seeds out and now I have a jar with some seeds and water, covered with cling film with holes punched in, sitting in a warm place out of direct sunlight.
Fingers crossed!