Good morning.  It's too dark to say what the weather is like but wasn't yesterday beautiful?  The BBC tells me that today will be less sunny but fine, all the same.  OK by me!

I had a most successful expedition into town yesterday.  I set out to get some thread, some zips and, hopefully, a handbag.

The first two were easy.  The market stall really is very good.  So much stuff crammed in such a tiny space which makes it awkward when busy but at just after nine on a Saturday morning it was fine.
Then I went to look at the market stall but, disappointingly, there was nothing that suited.  Several lovely bags, sure, but just too small.  Not MY bag!

So I left the market and thought where I might get a bag.  Bhs was my first thought but then I remembered that it has closed.  Debenhams is way too expensive (I looked a couple of weeks ago).  However, we do have an M&S and, even better, I remembered that I had an M&S gift card that I had never used.

After wandering around the food hall (sheer pleasure), I found the bags and, yes, there was one that was Just Right!  It was much more than I would have wanted to pay but that gift card made it affordable, so there you go!

Once home, I transferred all my stuff over and, while doing so, found something important that I have been looking for and thought I had lost which was a great relief and made me very happy.

After that I used Thermione II to make the spelt dough (lovely smell) and I now have a couple of loaves to enjoy.  I shall slice it and then freeze it as I eat much less bread nowadays.

I also did some sewing and finished the gift I am making.  I'm not totally sure about it really so I'll see what Beth thinks.

Today I'm baking in the morning and in the afternoon H is coming round to fit the ramps for my front door.  Really exciting!

I'm not totally sure about today's food.  Must do some more menu planning!

Added later - I forgot to post this - yesterday's pickings from a very small patch! 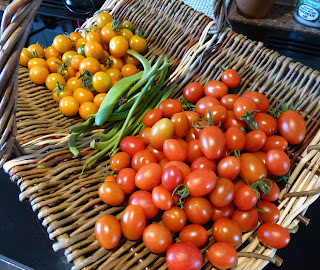