Good morning, everyone, and welcome to Suffolk.  To my dismay, it was raining yesterday morning but it had cleared up by the time I was ready to leave for Framlingham and it remained sunny/cloudy/dry for the rest of the day, albeit quite humid - not my favourite weather really.

I spent the day wandering around Framlingham Castle and then the church.  I wandered down to look at the market but, as it consisted of four stalls, there wasn't much to look at, sadly.

Never mind, the castle and the church made up for that.  Built originally in the 1100s, 'modernised' in Tudor times with then very expensive red brick, it has no central keep but consists of a curtain wall with thirteen mural towers to keep watch over the surrounding countryside.  The Tudors built a number of somewhat incongruous but attractive chimney stacks on the towers, some of which are just for show, ornamental rather than practical.  Framlingham castle is where Mary Tudor  raised her banner before marching on London after Lady Jane Grey was declared queen. 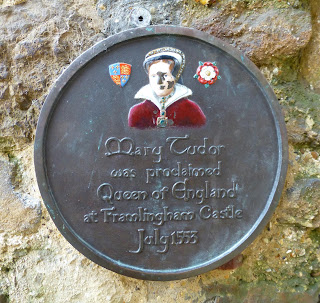 In Stuart times and beyond, the internal buildings, now in ruins, were destroyed and a very attractive Poorhouse was eventually built.  By that, I mean the building is attractive, of course.

There's a very exciting and interesting looking Wall Walk and I really wanted to have a go, despite my fear of heights.  Access to the walk was via a rickety, worn, winding staircase with a rope handrail.  Taking a deep breath, I trembled my way up about twelve steps before getting to a gap in the handrail and then couldn't get any further.  You might call it a bit of a panic attack.  For several minutes I stood there, not being able to go up or down, wondering what on earth I was going to do (calling for help wasn't a favoured action!) before managing to retrace my steps down to the ground again.  I was very angry with myself but there you go.  Ironically, the stairs for the way down have been 'covered' by a wooden staircase which looked perfectly manageable but it is a 'one way' walk so I couldn't use them.  If I'd been thinking straight I would have asked staff if there was another way up but maybe it was just as well as parts of the walk looked very exposed.  At least I tried but I did feel a wally though!

After an restorative ice cream, I went down to the Church which was also very interesting.  There are several very ornate tombs including one of Surrey, the 'poet earl' who 'invented' blank verse that was then used to such great effect by Shakespeare and whose coronet is not on his head but beside him as he was executed for treason. 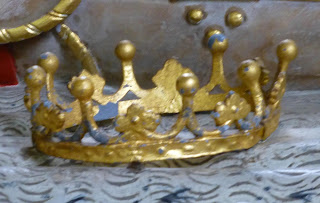 Close by there is a tomb for the wives of one of the Dukes of Norfolk.  It says plenty about the lot of  even wealthy and well born women then as there are are effigies of two of his wives with space left for a third, should it be needed! 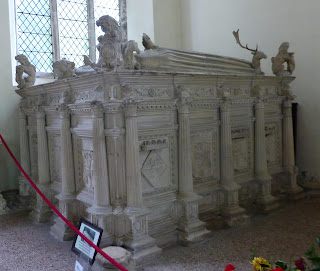 After popping in to the Co-op to get something I had forgotten to bring, I came back here to have a little rest, deal with rather a lot of photos and then eat the dinner I had requested.  It's a B&B but Anne does meals on request and, given that the local pub is closed on Tuesdays, I requested.  She produced a wonderful meal - duck with an orange sauce, new potatoes, runner beans, carrots and asparagus with profiteroles for afters.  I have no idea what it is going to cost me and really I don't care it was beautifully cooked, delicious and just perfect after a day of history.  I forgot to take a photo though!

Today I intend to look at Shawsgate Vineyard ( http://shawsgate.co.uk/page4.html ) and I daresay I will come back with 'refreshment' for the evening, after I come home from dinner at the pub.  I am quite looking forward to a glass or two of something with a good book in my very comfortable room!  If that doesn't take too long I think I might just head for the open road and trust my sat nav not to get me too lost.

Breakfast is in forty minutes.  I was very piggy yesterday and had not only the fresh fruit and some orange juice, but also the full cooked breakfast AND toast with marmalade to follow, with a carafe of coffee (not decaf!) offering.  As a result, I really didn't need much lunch which was just the idea!  So I am looking forward to today's.

Tomorrow I might head for the coast or I might look out a stately home.  Given that I do intend to come back here another time (or two), it really doesn't matter all that much.  Freedom is lovely!