Today's garden happy - the cucumber really dislikes this heat and it's all shrivelled up again after seeming to recover.  However, it is still valiantly attempting to produce fruit - that drive to reproduce is so very strong. 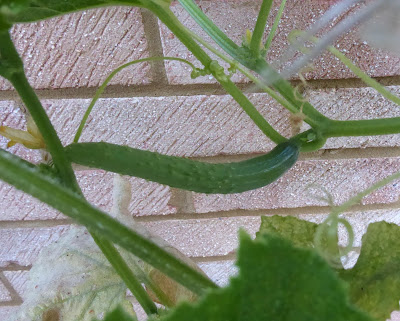 Good morning, everyone.  It is stupid o'clock and still quite dark outside but we have had some rain overnight (yay) and it feels considerably fresher again after quite a humid day yesterday.  We have more rain predicted early evening after a sensibly warm day and tomorrow looks 'gently damp' for much of the day.

Yesterday pretty much went as planned.
The lovely Chris left some more apple on the doorstep.  I cooked the first lot and they are in the freezer but I think I will just blanche this load and open freeze them.
In exchange, I took over some tomatoes as Chris' are a bit late and only just ripening - she gave me a couple of plants and mine are the same.  Maybe they will go on for longer.

I had a good Internet trawl and found several freebie patterns for tiny weeny baby socks, proper socks not bootees, dug out some plain white four ply and had a go.  Oh, my - so, so fiddly, especially the toe part, but the results are rather pleasing.  I'll take a photo when I've finished the second one.

The swift winder gadget turned up mid afternoon.  I got a fair old shock when I saw the parcel - surely it can't be THAT big, thought I, and, in typical Amazon fashion, it wasn't!!

See what I mean?
It took me a while to figure out how to set it up.  There were instructions but they weren't the clearest.  However, I got there and had a happy time winding my skeins into balls, all ready to use.
While I was winding blissfully, Matt the Plumber turned up.  On Sunday, the plug mechanism in the bathroom wash basin seized up so I fired off an email asking if could possibly drop in next time he was in the area.  I call that a prompt response.  Anyway, five minutes later I had a working plug again and  he didn't even charge me which I call the best service.  Bless him.
Circuits was good.  There were only three of us - two were on holiday and one wasn't well.  We worked through three quarters of an hour of pretty energetic stuff that left up somewhat hot and sweaty but it really was satisfying.
Today looks to be easier.  There's Groove aerobics first thing and then I want to go on to Hobbycraft as I need some more DPNs.  After that, the day is my own - well, housework, etc, of course, but apart from that . . .
It's still quite dark outside but the dishwasher has finished (I usually do a load overnight) so I will go and empty that before doing the Facebook stuff.
Do you have rain?  I gather there have been some formidable storms in some parts although none here as far as I know (although I usually miss overnight storm drama anyway) with some localised flooding.  Hopefully, everyone is OK.
Take care and have a great Tuesday.  xx